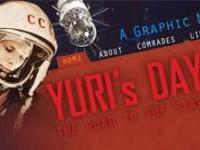 Contemporary children are hard to impress, only superheroes of blockbusters are capable of making it happen. Several British individuals have created a comic book about the first cosmonaut Yuri Gagarin to tell the younger generation of real life heroes in a more accessible way, and show Soviet reality in its "insane and cruel splendor."

The comic book was created to commemorate the 50th anniversary of the first manned space flight the world will be celebrating this year. The Graphic novel called "Yuri's Day: The Road to The Stars" does not look like a fairy tale - rather, it is meant to tell what the man who discovered the cosmos was like. "Yuri Gagarin, the first man to travel into space, exists in the minds of most of us like a vague image in a metal helmet. We live outside of Russia and have little idea about what happened to him after the historic flight ..., " "Yuri's Day" tells of Gagarin's gradual disillusionment with the Soviet system," said the authors of the book Andrew King, Pierce Bison and Peter Hodgkinson. They added that they intended to reveal the complexity of Soviet reality "in its insane and cruel splendor." The story told by the British began in the late 1930's, when the designer Sergei Korolev was thrown into jail on charges of sabotage. In addition to the Korolev and Gagarin, comic book describes the best friend of the first cosmonaut, Alexei Leonov, cosmonaut "number two" German Titov and the director of the cosmonaut training program and an ardent Stalinist Nikolai Kamanin.

The book that is only 64 pages long is only available in English at the moment, but in the future the authors hope to translate the comics into other languages, including Russian. Perhaps, there are many people who will condemn narrow-minded Europeans who know almost nothing about the great events and people who have made history. However, the modern reality is that not all Russians are able to name the date when Yuri Gagarin uttered his famous "Let's go!"

These ideas, despite their ambiguity, may provoke the interest of young people for history at least marginally.

The British project is not the first attempt to turn "boring" into "exciting." In 1953, the Japanese Osamu Tezuka created a comic in the traditional Japanese manga style based on the novel by Fyodor Dostoyevsky's "Crime and Punishment." Several years ago, the best illustrations were exhibited in St. Petersburg, and in early 2010 one of Yekaterinburg publishing houses has purchased the rights to publish the book.

The characters of the comic do not bear resemblance to Dostoevsky's characters. The Japanese author portrayed Rodion Raskolnikov as a funny boy with big eyes in a red jacket, and the old woman in his pictures looks more like a witch from a Disney cartoon.

However, according to the creator of the manga, all of his tricks still have not helped to promote the popularity of "Crime and Punishment" among Japanese teenagers. Even after the reduction of the novel it did not become clearer for the younger generation. A few years ago the most popular Christmas gift in Japan was a comic based on Karl Marx's "Capital". In December of 2008, the first 25 thousand copies of an unusual manga were sold in the first few days.

However, the Japanese comic had little to do with "Capital". The melodramatic story takes place in the 19th century at a cheese factory. The production plant is headed by Robin. He rejects the socialist ideals of his father, seeks to make money and gets involved into difficult situations when he comes across the cruel world of business.

The protagonist of the comic "Capital" is constantly torn between the desire for the appropriation of added value and compassion for the oppressed workers, and his actions step by step illustrate the basic provisions of genuine works of Marx.

As for Russia, students here seem to have developed issues with the works of the Russian authors. As reported by Newsinfo, last year Education Minister Andrei Fursenko introduced a book by Alexander Solzhenitsyn's "Gulag Archipelago" into the high school curricula. Yet, for the kids who are coached for standardized tests, four volumes of reading turned to be extremely challenging. Therefore, the writer's widow Natalya Solzhenitsyna, remembering the long-standing desire of her husband, decided to adapt the text for high school students.

It is worth mentioning that Solzhenitsyn himself was not very pleased when forced to agree to abbreviate his creations for the American students. "Living in exile in the American state of Vermont, Solzhenitsyn received letters from American professors: they said that their students could not complete all three volumes of "Archipelago", and it would be great to provide them with a shortened English edition," told the widow of the writer to Russian newspapers. The author resisted, but in the end, Professor Edward Ericson persuaded him and submitted one volume version for review. Solzhenitsyn, with a sigh, said to me: "What do I do? If they cannot cope with the full version, let it be this one. But in Russia, when the time comes, there will be no need to shorten it".

Later, however, Solzhenitsyn changed his mind, and shortly before his death he instructed his wife to make a school version of the novel. It is difficult to say if his idea will be implemented. The opponents mention the complete degradation of the generation of Russians that has stopped reading. Proponents of the idea think that it will let kids read at least a shortened version, rather than not know who Alexander Solzhenitsyn was.

If the idea is implemented, then in ten years nobody will be surprised that the students in Russia are studying "War and Peace" and "Master and Margarita" solely based on the comic books or a special computer games.