Russian President Dmitry Medvedev signed a decree to establish a special committee to counteract the attempts of distorting history to the detriment of Russia’s interests. It was an expected decision: Medvedev has made a number of statements recently about the inadmissibility to falsify historical facts and events. 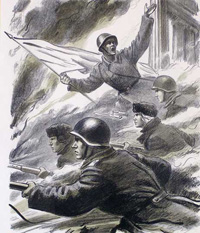 The subject of history falsifications receives special attention when it comes to WWII events. It is not the first time when people discuss the USSR’s victory in the war claiming that Soviet soldiers were looters and rapists in Germany and other European countries and so on and so forth.

Dmitry Medvedev posted a video message on his blog on the threshold of the Victory Day and said that the attempts to distort history had become especially spiteful and aggressive. “The number of people who participated in the war and saw that war with their own eyes has been getting smaller and smaller as years go by. This vacuum, this gap is being filled with a different vision and new formulations of the results of the war either ignorantly or deliberately,” Medvedev said in the message.

“As a matter of fact, we find ourselves in the situation when we must defend the historic truth and even prove the facts that seemed to be absolutely obvious not so long ago. It can be very hard and even disgusting at times, but we must do it. We must not turn a blind eye on the terrible truth of the war. We will never let anyone cast doubt on the deeds of our nation,” the head of state emphasized.

Vladimir Zharikhin, the deputy director of the Institute of the CIS said that the falsifiers of history propagandize their own ideas and do not provide any scientific substantiation of their views.

“As a result, our scientists, who take an objective stance on the matter, may often lose to those who use history as a legend to the benefit of the present political environment,” Mr. Zharikhin said.

Natalia Narochnitskaya, Doctor of Historical Sciences, said that such a committee should have been established long ago. If the current state of affairs is preserved in the future, the specialist said, it will not be a surprise if the next generation finds it difficult to say who waged war against whom.

“They will think that democratic countries were waging war against two totalitarian monsters that were fighting for reign,” Narochnitskaya said.

The scientist reminded that the denial of the Holocaust was considered a criminal act in many countries of the world.

“The discussion of to which extent we can allow others deny the history of the 20th century seems absolutely acceptable at this point, she said.