Having survived the most unsuccessful 12 months of his career in the White House, President George W. Bush hopes that the year 2006 will become the crucial and more successful political period for his administration. However, Bush will have to solve a whole range of very complicated problems next year. The list of goals includes the consolidation of the Republican Party, obtaining an approval from the US Congress for two key laws (on tax reduction and immigration) and improving the situation in Iraq to start at least a partial withdrawal of the military contingent. 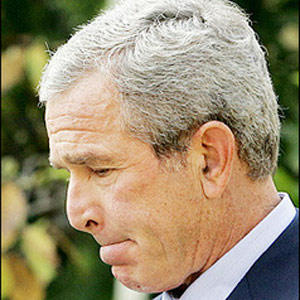 When reelected for the second term a year ago, George W. Bush was certain that he would become a part of the American history as the leader, who courageously declared war on terrorism after the 9/11 attacks. Bush thought that he would be remembered as a politician, who initiated fundamental reforms of the Tax Code and the Social Security System of the USA. The president promised in January 2005 during his inaugural speech that the USA would improve relations with its traditional allies (European countries), promote democracy and freedom in “the liberated countries,” improve the USA's image abroad and prevent the proliferation of nuclear weapons in the world. According to Bush, he had a respectable political capital and a mandate from the US nation after the successful pre-election campaign. Bush proudly stated back then that he was going to use the mandate and the capital to start his own style of working.

It was hard to believe a year ago that the image of the US president would be damaged so much. The majority of Americans, Republicans and high-ranking US officials reacted highly negatively to Bush's initiative to privatize the Social Security System founded by Roosevelt over 70 years ago. Bush failed to win the support of his opponents in spite of numerous public appearances across the USA. As a result, the president had to forget about his initiative, which was originally supposed to become the key economic decision to future generations of American people.

The reaction of the US administration to the consequences of the destructive Hurricane Katrina became another serious failure of the American president. The hurricane flooded New Orleans entirely and left thousands of people with no water, food and medicines. TV reports about looting, dead bodies scattered in the streets of the city and the abandoned people in the Superdome shocked the whole world. US politicians, however, were talking about the imminent help from the military men, about thousands of buses prepared to start the massive evacuation of people and about huge stocks of foodstuffs that were about to be delivered to the disaster-stricken city. George W. Bush virtually vanished from the public eye during those tragic days. The president appeared three days after the hurricane, when he interrupted his vacation and went to see the flooded city.

The year 2005 was not successful for the US president in terms of international relations either. The US administration failed to resume the talks regarding the nuclear programs of North Korean and Iran. As for the USA's image, it was severely damaged after the scandals with tortured Iraqi prisoners and CIA's secret jails. Therefore, the subject of improving international links with traditional allies, Germany and France, first and foremost, went deep into the background.

Iraq and the permanently growing number of US losses in the war-torn nation remains George W. Bush's biggest problem, of course (2,160 military men as of the end of December). Despite Bush's affirmation of the forthcoming improvement in Iraq, world's media outlets continue to report about new explosions and terrorist attacks in the Mideastern country. The war became extremely unpopular among the Americans. Many US politicians, including some of Bush's party fellows, raised the subject of withdrawing US troops from Iraq as soon as possible.

Numerous failures of the US administration have made George W. Bush's popularity fall to the lowest point in his career. All and many other of the above-mentioned facts raise serious concerns with the Republican Party. Elections to the US Congress will take place in November of 2006. The Conservatives fear that they may lose the incumbent majority in the Senate and the House of Representatives. Furthermore, one should not forget about the next presidential election in the USA. Democrats are becoming more and more active in their criticism of the Bush's administration against the background of the president's poor international image. Such sentiments and actions were considered anti-American not too long ago.