Horn of Africa: 3.5 million at risk

Two and a half million people have been left at risk of starvation in Kenya due to the non-appearance of rains while in the northern neighbour, Somalia, one million are in need of urgent aid, 350,000 of these in what the UNO describes as an “acute” crisis. 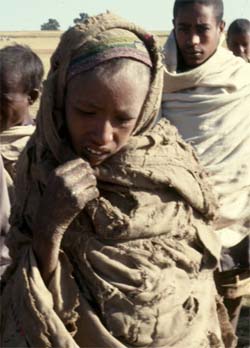 The UNO's World Food Programme (WFP) gave the alert on Friday, that two and a half million people are at risk in Kenya due to the lack of rains. The situation is especially critical in the northeast, but also in the eastern region of the country, where the rains in the last quarter of the year are around 30% less than the level required.

The lack of rains has been responsible for the deaths of many head of cattle, camels and donkeys. According to the Director of the WFP for Kenya, Tesema  Negash, “food security is already critical” in some areas, while it will not be possible to make a final assessment until inspections have been carried out in the field in January.

Describing “a rapidly deteriorating situation”, Tesema Negash added that “we need immediate action to avoid the loss of people's assets and their lives.”

In a world where the United States of America has spent two hundred thousand million USD on its illegal act of slaughter in Iraq, the WFP needs just forty-six million USD for Kenya, but is not receiving it.

Meanwhile in Somalia, a further one million people are at risk, 345,000 of them in a situation described by the UNHCR as “an acute food and livelihood crisis.” Another group of 200,000 are classified as being in a “humanitarian emergency” and 400,000 internally displaced.

After 14 years of civil war, unemployment, human rights abuses, disruption in trade and commerce, disease and violence have compounded the problems caused by flood and drought cycles.

Kofi Annan declared recently that “I could not stress enough the need and the urgency to provide a safe operating space for humanitarian agencies to reach these people.”

Somalia needs a serious approach by the international community to help the UNO in achieving its mission. Widespread violence is hampering the security of supply convoys and the humanitarian crisis has driven many people to desperation point, increasing the violence even further.

As the international community gets ready to spend billions on food and drinks and certain countries waste hundreds of billions of dollars in weapons systems to blast the limbs off Iraqi children, let us remember this Christmas that 25% of Somali babies die before they reach five years of age.