Little-brained big heads of the States

The use of Agent Orange and the massive napalming of the forests and consequent pollution of the water supply have created problems which are still manifesting as birth defects. One of the lectures I attended was on “auricular reconstruction” which is about giving people ears when they are born without them”. This is what Dr. Meredith Burgmann, the President of New South Wales Legislative Council, who returned recently from a trip to Vietnam, has written in the Daily Telegraph of 25th October 2005. 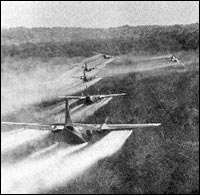 The above comments from Dr. Burgmann serve as the latest proofs of the US Crimes against humanity inflicted on the Vietnamese people by the US forces during their invasion of Vietnam. In spite of the constant flow of facts about the consequence of USA's crimes against humanity most of the heads of states seem to lack the courage to call it what it was to put an end to continuation of America's policy of aggression in the world.

One could imagine how loud and fierce would have been the US retaliation if it was the American babies who continue to pay decades long “price” for not fault of their own. There are no “embedded American journalists” in Vietnam to rally relief for the Vietnamese victims of the crimes committed by US. It has been politically incorrect and will be soon prohibited in Australia, to talk about US, in those terms.

Howard's new anti-terror laws which are about to be steam rolled through the Senate and the House of Representatives will give powers to ASIO to interpret an article such as this as a “threat to national security” and to arrest and detain the author indefinitely. They will dig in to peoples political beliefs to fabricate anything to convict anybody under any pretext. They have teams of spin doctors to come up with the “appropriate justification.”

Some people, who have strong feelings about human rights, and state sponsored terrorism would rather be silent than “inviting themselves trouble” this is exactly what the new laws are aimed at. But many others will shed their differences to unite against the new laws. It has started to happen already. A strong public opinion is being born across the wide and deep fabric of the Australian society, including religious, political, independent media and business leaders and also ordinary Australian of various political, religious and ethnic backgrounds. Worse draconian laws introduced in other parts of the world have not been able to keep the truth away from the public.

In the meantime enormous deal of work has been carried out silently by many good hearted Australian Medical Professionals, Students and staff of the Universities and some Politicians to ease the pain of their Vietnamese neighbours suffering from US crimes against humanity. Chaired by Professor Bruce Robinson, Hoc Mai Foundationhas been in the forefront in carrying out such relief work in Vietnam. This is a charity organisation for the medical exchange between the University of Sydney and the Viet Duc Hospital in Hanoi.

The Governor of New South Wales, Professor Marie Bashir is the patron of the Hoc Mai Foundation. The Asia Pacific Friendship Group, of the New South Wales Parliament has been active in fundraising and supporting the medical relief, training and exchange projects carried out in the Viet Duc Hospital.

Brutal effects of America's Agent Orange in Vietnam and Nuclear Bombs in Japan's Hiroshima and Nagasaki still continue in the form of various complications in pregnancies and babies with inborn defects. Some of these health problems can be partially cured with medical intervention whereas there are others which remain lifelong. The untold misery, pain and suffering of these victims do not find publicity in the media, as it is “politically incorrect” and “unpatriotic” to talk about these issues.

After half a century US aggression and inhuman policies still continue in Iraq. Instead of old WMDs this time US forces used depleted Uranium, Bombs, cluster bombs and other ordinance against the people of Iraq. US do not keep a record of the “enemy casualties”. Only after the dust has been settled (which is not likely to happen for quite a sometime) that the world would find out the enormity of the US crimes against humanity in Iraq. According to the latest statistics, the war in Iraq, which Rumsfeld initially promised to be a “Cake Walk,” has so far cost 2000 American Lives, and still keep on growing. Many Americans are taking to street to demand Bush to end this war.

It is our freedom of speech that Bush, Blair and Howard would like to restrict so that there would not be any voice against their “justification” of the unjustifiable. According to their model of democracy no one would dare write and speak the truth about their crimes against humanity, as according to Bush, Blair and Howard it will be “Alquidian,”  Bin Ladinian” “Jihadist” or “unpatriotic” to do so.

While John Howard is continuing to act subservient to Bush in supporting the senseless continuation of crimes against humanity in Iraq, the ordinary Australians not only oppose thewar but also open their hearts to carry out humanitarian aid to ease the pain already inflicted on many hundreds of thousands of fellow human beings by the previous crimes against humanity planned and carried out by the US.

It will be these humanitarian and big-hearted ordinary Aussies, the world would honour as the real heroes and leaders of our time.

Once the power is gone and struck off from the media lime light, Bush, Blair and Howard will only be remembered as the most deceptive, “Little Brained Big Heads of States” that the world has ever known.

16:09
The President of Sri Lanka asks Putin to help with credits for the purchase of fuel
15:46
Russian car sales collapse by 82 percent
15:31
Ukraine sells French Caesar howitzers to Russia
15:22
Russian billionaire divorces his wife after 30 years of marriage
14:59
Russia destroys two HIMARS systems that Ukraine received from US
14:48
Russia to start a new stage of the operation in Ukraine
18:32
Ex-Foreign Minister of Austria leaves the country due to death threats
18:11
DJ plays obscene song by Little Big at children's matinee
17:29
Medvedev: Japan will have dark future without Russian oil and gas
16:48
Ukrainian militants call the eastern front of the Russian operation "hell on earth"
Asia
After cargo ship incident, Turkey will soon close the Bosphorus for Russia