The little girl's body was placed in a container of formalin, from where it is still gazing at the world with the only one big blue eye 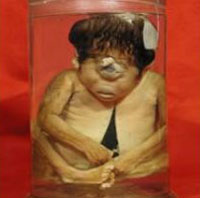 The weird baby looked at the world with its only eye, took a breath of air with the trunk that was growing on its forehead, and died. Doctors of one of St.Petersburg hospitals told the Komsomolskaya Pravda newspaper that it was an absolutely normal woman that gave birth to the incredible mutant-baby, which could be compared to a Cyclops. The female creature was covered with thick hair; it had only one eye in the center of its forehead and a small trunk that was growing on the head above the eye.

The middle-aged mother of the unusual child had a preterm delivery. Doctors would not have time to take her to the maternity hospital. The woman gave birth to the baby girl at home. Doctors' hair stood on end when they saw the seven-month-old fetus. Thick hair was growing on the girl's shoulders and back. Locks of hair were growing on the baby's head too. The little girl has a big blue eye on the forehead. The child had no nose: there was something strange growing on the head right above the eye. Doctors believed at first that it was a penis, although they determined later that it was a small trunk, through which the baby could breathe.

The mutant child died almost instantly. The doctors tried to take life-saving efforts, but they brought no result.

It is hard to imagine what kind of shock the child's parents had to survive. They were dreaming about a baby for long, but their dream ended with a nightmare.

The deceased infant was sent to a morgue, where professional experts of forensic medicine thoroughly examined the little body. The hairy, one-eyed girl had a number of other physical defects, which would not let her live even for several days.

Nobody buried the strange baby in the end. The body was placed in a big glass container of formalin, from where it is still gazing at the world with the only one big blue eye.

”This is a unique incident, - gynecologist Ivan Rylchikov said. – Such deviations are possible; they can be caused with a variety of reasons. The formation of the eyes and brain starts during the first week of the embryonic growth. The presence of certain chemical substances, various medications, in the organism of the mother can exert a strong influence on the fetus too. Tetracycline, which is strongly not recommended for use during pregnancy, can cause a certain deviation in the physical development of a child. The medicine affects the development of the fetus's bones and teeth; even a small dose can be extremely dangerous for an unborn child. A Cyclops is not viable – they do not live longer than only one week. In addition, nature has its own regulator. If the development of the fetus takes an unusual turn, the probability of a miscarriage increases a lot. This is the way that Mother Nature uses to kill mutants in the womb,” the specialist said.