One of the latest charges against the Bush administration made by Cindy Sheehan, liberal whacko's and other various peaceniks around the world is that the United States is waging a nuclear war in Iraq. This came as news to me since nuclear war brings thoughts of mushroom clouds and the death of millions to mind. I just don't remember this happening in Iraq. 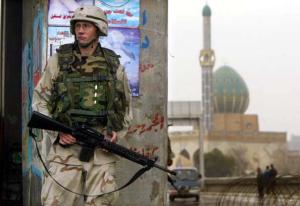 Of course this propaganda is understandable since it originated in the minds of the deranged. The left's 'illogical' reasoning for the unwarranted accusations of nuclear war is this: The United States military is using depleted uranium tipped artillery shells on the battlefields of Iraq.

Although laughable by the sane, these arguments seem to be the latest talking points among liberal appeasers around the world. This illogical nonsense more than likely originated from the office of Paul Begala or James Carville, fellow stooges of the “American Back Stabbing Club” who are out to get President Bush at any cost.

I wrote in last week's column that, “Mrs. Sheehan also proved her lack of intellect stating that, 'We are waging a nuclear war in Iraq right now. That country is contaminated. It will be contaminated for practically eternity now.' I must admit, nuclear war is news to me.  Has anyone else heard of this?”

I received many emails from propaganda filled zombies of the far left from around the world informing me that, “When Ms. Sheehan refers to nuclear war in Iraq she is talking about the thousands of tons of depleted uranium the United States has gleefully rained down on all of the people of Iraq.”

Gleefully rained down?  Thousands of tons?  Let me see if my math is correct. We will just say, for arguments sake, that the emails are correct. I will use one thousand tons of depleted uranium as a starting point. One thousand tons equals approximately two million pounds of depleted uranium rained down on Iraq. That certainly is a lot of uranium, especially since each shell contains a very small amount of uranium.

As usual, it is so easy to completely smash any argument made by the left, I sometimes wonder if it is even worth the effort. But I will anyway in order to stick up for the good name of the United States.  Something liberals in America fail to do these days.

Merriam-Webster dictionary defines the word nuclear as, c (1) : being a weapon whose destructive power derives from an uncontrolled nuclear reaction

Depleted uranium used in armor piercing shells and in enhanced armor protection for some Abrams tanks is also used in civilian industry, primarily for stabilizers in airplanes and boats.

I guess all the recreational boaters tooling around on the lakes and rivers around the world are also engaged in a nuclear war. Although I should not have brought up this point since I'm sure environmentalist whackos around the world will soon use this argument in an attempt to ban boats from rivers and lakes.

A common misconception liberals are trying to spread is that radiation emitted from depleted uranium shells is the primary health hazard to the unfortunate soul on the receiving end of one of these weapons. This is not the case under most battlefield scenarios. Explosion is the primary hazard, not nuclear radiation or contamination.

Depleted uranium does not significantly add to the background radiation that we encounter every day. The average person receives more radiation from dental and medical x-rays or sitting in the sun in a year then they would receive from a direct hit by uranium tipped weapon. But does it really matter since the recipient of a depleted uranium shell is usually killed by the explosion?

Throughout history liberal ranting by appeasers has never ended any conflict or stopped terrorism. Only armed conflict has prevailed. Why can't the left see this and stop all the lies?

Hopefully Cindy Sheehan's time spent in the ditch in Crawford, Texas will do some good. I think mothers of terrorists around the world should take her advice and keep their sons and daughters at home. It is inevitable that the United States will win the war on terrorism and their love ones will surely die. Depleted uranium or not.

The opinion of the author may not coincide with the point of view of Pravda.Ru editors

Author`s name Steve Darnell
18:54
Ukrainian soldier uses chainsaw and fire to release US howitzer from ice trap
18:30
Onet: Ukraine will lose in six months due to shell shortage
17:36
Russian troops defeat Ukrainian troops in Zaporizhzhia region
14:50
Number of foreign mercenaries in Ukraine continues growing
14:17
Russians buy more than 50 tons of gold in 2022
13:57
Russia will not talk to Ukraine. Russia will talk to the West
13:34
USA's plan to give 20 percent of Ukraine for peace hoax
12:51
Medvedev: Ukraine as a state to be devastated, go bankrupt and be turned into colony
19:57
Russia will use all of its military potential to counter Western arms supplies to Kyiv
18:34
Biden changing strategy on Ukraine to reach diplomatic solution with Russia
The West prepares army to invade Russia