George W. Bush 'not guilty' of US solders' deaths in Iraq

The unshakeable persuasion of an average American, who thinks that his country is the best in the world, has become the talk of the town

The anti-war meeting near US president's ranch has been going on for more than two weeks already. The action of protest was launched by a woman named as Cindy Sheehan, who had lost her son in the Iraqi war. Apparently the woman did not even think that her action would find such vivid response amid American citizens. It is noteworthy, that Cindy Sheehan has quite a number of both her followers and adversaries. We would like to present our readers an article, which represents an opinion of an average American on the matter. 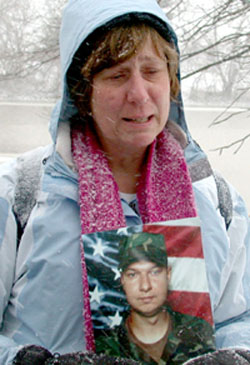 It is time to put an end to the “Cindy Sheehan debacle” in Crawford, Texas.  Since I am not one to sugar coat a subject I will start by simply saying:  Ms. Sheehan is a liberal nut case who needs to be put in her place.

I know, these are strong words to use against a “grieving mother”, but the time for grief is over.  Mrs. Sheehan's own hateful words ended her grievance.

Cindy Sheehan is camped out in Crawford, Texas demanding to see President Bush over the death of her son in Iraq.  Her son, 24-year-old Army Specialist Casey Sheehan, was killed in Iraq last year.  She has also started protesting the war in Iraq and has since become the poster child for the anti-war whacko's who are calling for the complete withdraw of troops from Iraq.

For the record, Mrs. Sheehan already saw President Bush in June of last year when Mr. Bush met with families that have lost sons and daughters in Iraq.  At that time Mrs. Sheehan seemed to appreciate the meeting saying,   "I now know he's sincere about wanting freedom for the Iraqis," Cindy said after their meeting, "I know he's sorry and feels some pain for our loss. And I know he's a man of faith."

Now, apparently the grieving mother has changed her mind about President Bush, calling him the “biggest terrorist in the world.” The Drudge Report produced transcripts of a speech Mrs. Sheehan recently gave at San Francisco State University where she said, "We are not waging a war on terror in this country. We’re waging a war of terror. The biggest terrorist in the world is George W. Bush!"

She continued her anti-war tirade saying, "The whole world is damaged. Our humanity is damaged. If he thinks that it's so important for Iraq to have a U.S.- imposed sense of freedom and democracy, then he needs to sign up his two little party-animal girls. They need to go to this war."

"We want our country back and, if we have to impeach everybody from George Bush down to the person who picks up dog sh*t in Washington, we will impeach all those people."

Mrs. Sheehan also proved her lack of intellect stating that, "We are waging a nuclear war in Iraq right now. That country is contaminated. It will be contaminated for practically eternity now."  I must admit, nuclear war is news to me.  Has anyone else heard of this?

I think it is time for our gloves to come off.  Many columnists around the country have “tip-toed” around the Sheehan controversy because they have respected the loss of her son.  But now Mrs. Sheehan is showing her true colors:  Liberal activists, not loving mother.

I think it is time to fight back.  Mrs. Sheehan and other appeasers around the world provide the fuel that feeds the fire of terrorism. If not for this fuel, terrorists would realize that they do not have a chance to sway the minds of people and would end the bombing. Terrorists are not stupid, they understand that bombing innocent civilians will not change the minds of the strong, but will break the will of the weak. So they attack the weak and the weak fold.

Spain is a good example of this reasoning. Would the terrorists have attacked Spain if the whole population stood strong against terrorism?  No. What would be the point?

Every time an appeaser voices his or her opinion against the war in Iraq terrorists gain hope that they can change the will of the people. So whether they want to admit it or not, appeasers protesting the war in Iraq are indirectly responsible for the death of the innocent. And the death of our soldiers.

In fact appeasers are directly responsible for the death of Mrs. Sheehan's son, not George W. Bush. If the whole country was united for the war in Iraq, I doubt if the terrorists would have started their suicide bombing campaign.

Using this logic Mrs. Sheehan has become the biggest terrorist in the world, not George W. Bush as she so eloquently stated. And the liberal media has become her ally by spreading the word of her protest to the terrorists.

One other point: Every time Mrs. Sheehan opens her mouth in protest she is dragging the legacy of her son through liberal muck. Her son was a hero who volunteered to serve his county and died protecting the constitution. Now his mother has become a traitor who is using the war on terror to wage a war against a president whom she does not like. What sense does this make?

Mrs. Sheehan is the lowest form of crust the left has produced recently in sea of liberal appeasement. Does she have no shame? Does she want her son to be known as the son of the liberal whacko from California sitting in a ditch in Crawford, Texas, or would she like her son to be known as a young man who died protecting the people of the United States?

She is no longer a grieving mother but has become a target in the battle against liberal activism and it is time the war is taken to the enemy. Unfortunately her son's good name will soon go down in history as the son of a whacko liberal instead of a war hero.

It is hard for us to believe after reading such stories that there could be people in the USA, who share this point of view. The answer is obvious, they do share it, George W. Bush would not have won the election for the second time otherwise. It would be easiest not to comment anything here and just say that the US propaganda has completely obscured the minds of a lot of Americans. The propaganda machine of the United States of America is probably the best of all that have ever existed in the history of mankind. However, there are a lot of other sources of information; the media are not limited to only Fox News or WorldNetDaily only, for example.

However, there are people who simply do not take efforts to compare these or those facts from several news sources. As long as a lot of them are unaware of depleted uranium nukes, and which harm they bring to people and the environment, then what do anti-war movement activists got to do with it?

The reference to Spain was an eye-opener. Doesn't it seem obvious that Spaniards have been struggling against the terror of Basque separatists for many years, or George W. Bush's followers are not interested in it?

The most important thing, which Bush's diehard proponents cannot understand, is the fact that the war in Iraq has never assisted in the struggle against terrorism. Al-Qaeda could not even exist in Iraq until the collapse of the Saddam Hussein's regime: the terrorist network was as dangerous as the USA for the former Iraqi dictator. So what do we have now, almost two years after the end of the military campaign? We have the country, which is swarmed with all kinds of terrorists. Cindy Sheehan does not understand what her son died in Iraq for; Mr. Bush and his advisors were perfectly aware of the matter they were going into, but they ventured to proceed with the adventure. Both the USA and the whole world will have to settle down the consequences of it for many years ahead. It brings up a natural question at this point: why did they decide to run such risks and what for? Was it because of Bush's personal aversion to Saddam Hussein? Was it because of their beliefs that the era of dictators was gone? Or was it because of quite obvious financial profits?

The unshakeable persuasion of an average American, who thinks that his country is the best in the world, has become the talk of the town. Well, let it be so, keep up the feeling of pride. Some people, however, have developed a highly exaggerated version of this feeling, which bears a certain similarity to the Nazi “Deutschland ueber alles” motto.

On the photo: Cindy Sheehan