Brazilian kidnapped by Islamists in Iraq

However understandable is the cause of those who fight for the freedom of their country against a foreign invading force, it must be remembered that Brazil was one of the members of the Axis of Reason which stood against this criminal and murderous campaign. 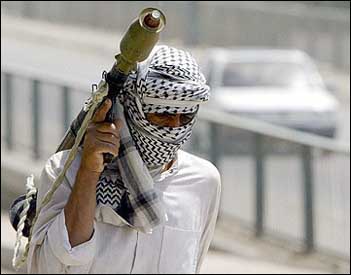 For this reason the kidnapping of father-of-three Joao Jose Vasconcelos makes no sense at all and goes against the grain of human decency. Whatever respect or sympathy the Iraqi freedom fighters held in the international community, they will lose unless they release this Brazilian hostage immediately.

Brazil is the home of hundreds of thousands of descendants of Arabs, who live together with a myriad of other races in harmony. Engineer Joao Jose Vasconcelos was in Iraq to help rebuild infra-structures smashed by the military forces of the USA in a campaign heavily criticized by Brasilia.

End the torture of the family of this man who was only in Iraq to do good and to help people whose lives had been destroyed by a country and a campaign his government had nothing to do with. Holding a Brazilian as a hostage is perhaps the most injust act of this war.

This act will be noticed by the international community and by those who are funding the cause of the Freedom Fighters in Iraq.

In the name of justice, in the name of humanity, in the name of reason, in the name of Allah, have mercy and be magnanimous to this fellow human being who has committed no crime and who represents a friendly government. Bless his family with the joy of receiving a husband and a dearly loved father back at home where he belongs.

This is the way forward towards getting more support.