From Myanmar, to Whitehall, to Washington - Politics Festering Nadir

From Myanmar, to Whitehall, to Washington - Politics Festering Nadir 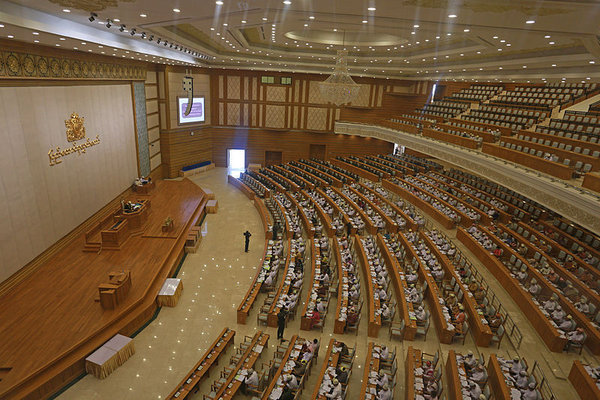 Oxford UK, the "city of dreaming spires", as described by poet Matthew Arnold and the oldest university city in the English speaking world, is to rescind the honour of the Freedom of the City awarded to Myanmar's Aung San Suu Kyi, over her response to the Rohingya crisis, reports The Guardian

"But then, once in a lifetime

the longed for tidal wave

of justice can rise up,

and hope and history rhyme.

Believe that a further shore

is reachable from here.

Oxford UK, the "city of dreaming spires", as described by poet Matthew Arnold and the oldest university city in the English speaking world, is to rescind the honour of the Freedom of the City awarded to Myanmar's Aung San Suu Kyi, over her response to the Rohingya crisis, reports The Guardian.

A unanimous cross-party motion stated that it was "no longer appropriate" to fete Myanmar's de facto head of State.

Council Leader, Bob Price is quoted as calling the move an "unprecedented step" for the authority. A special meeting to confirm the stripping of the status will be held on 27th November.

Last week St Hugh's College, Oxford, where she studied as an undergraduate, removed her portrait from public display. According the The Guardian (29th September 2017):

"In 2012 Aung San Suu Kyi was celebrated with an Honorary Doctorate from Oxford University, and held her 67th birthday party at the college where she studied politics, philosophy and economics between 1964 and 1967."

So far there is no talk of the Doctorate being rescinded, though a number of UK institutions are reviewing honours bestowed on her over the years.

"Bristol University, one of a string of universities that awarded honorary degrees to the Burmese leader during her time in opposition, also said it was reviewing its award in light of accusations of brutal mistreatment of the Rohingya" whilst: "The London School of Economics Student Union said it would be stripping Aung San Suu Kyi of her Honorary Presidency."

"A number" of other institutions are reported to be "reviewing or removing" honours previously bestowed on her, though no doubt as other dubious recipients of the Nobel Peace Prize she will retain that, awarded in 1991.

The UN have described the plight of the Rohingya as "a textbook example of ethnic cleansing."

Britain's Disasters and Emergency Committee has launched a major appeal for the Rohingya with the UK government led by Theresa May (who coincidentally also studied at St Hugh's College, Oxford) leading from the rear by pledging that the government would match the first three million pounds donated by the public.

If humanity existed the government would surely have led, donating the first major tranche of money and urging the public to join. But then when it is of a mindset that appoints a Foreign Secretary, the country's foremost "diplomat", who said yesterday of Sirte in Libya - where Muammar Gaddafi was horrifically, barbarically slaughtered and which Secretary Boris Johnson had recently visited:

"There's a group of UK business people, wonderful guys who want to invest in Sirte ... and they literally have a brilliant vision to turn Sirte ... to turn it into the next Dubai. The only thing they've got to do is clear the dead bodies away and then they'll be there."

From Myanmar, to Whitehall, to Donald Trump sneering at the devastated people of Puerto Rico ( if you can stomach it) it seems politics has hit a shameful, stinking, festering, inhuman low. Given the lows of the last decades, that is really saying something.

Author`s name Felicity Arbuthnot
*
15:02
Viktor Bout says he did not come across Russophobia in US prisons
12:02
Massive fire burns OBI hypermarket at Mega Khimki Shopping Mall to the ground
16:48
US basketball player Brittney Griner exchanged for Russian entrepreneur Viktor Bout
16:31
Zelensky believes Ukraine conflict may end in 2023
20:46
The West is expecting, but not pressing Russia-Ukraine talks
18:27
Putin: The threat of the nuclear war is rising, why deny it
17:17
Ukraine modenises Soviet Tu-141 Strizh drones
15:24
Ukrainian combat drones capable of flying at speed of sound may strike Siberia
14:35
Russian Army continues successful offensive in Krasny Lyman direction
20:56
UK and USA could be part of drone attacks on Russian military airfields
Polish writer shocked to find out Russians will not rise to topple Putin