With the Brussels Euro Gang of Snowflake Merkel and her five dwarves (G7 vassal states minus the U.S.) still bristling after President Donald Trump lectured them on the fineries of practical economics and international trade practices, American patriots in stark contrast were celebrating at home; as they should have been. Make no mistake. Trump spared no apathy. Instead, he drove his points home. Each one had its own emphasis and merits. He hit bulls-eyes on two major targets: the continued usefulness of NATO and the gang's even the world's view that the global climate hoax known as the Paris Accord had a special if not sacred efficacy worth preserving. Neither subject in of themselves was sufficient argument for Trump to take a more diplomatic approach with his audience. Even an approach so tepid as his predecessor chose. No, Trump would not follow that same ignominious path. He was wiser. 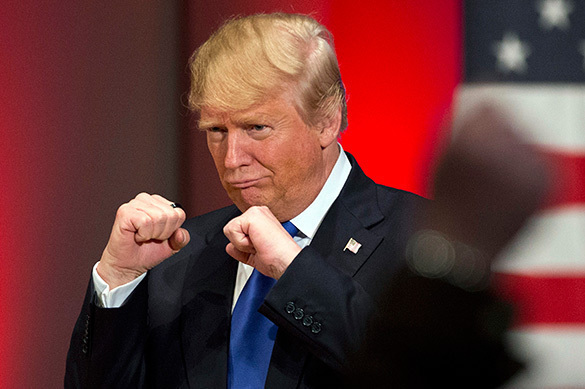 Although economics was at the core and fore of Trump's blunt message, when he cited, more like called out the delinquent member states for not meeting their 2 per cent of GDP defense spending commitments, he hinted at the underlying subterfuge behind his (America's) position on NATO's future. That is to say, Trump never once invoked Article 5 of the group's Convention. Article 5 states, that an attack on any member is in fact a declaration of war on the entire group. Not particularly obvious at the time, the full magnitude of Trump's ultimatum was not felt nor expressed by any of the dwarves, until Air Force One flew back across the pond.

Given the Euro hosts and their proclivity for reticence for all things American, President Trump may have even planned his exit strategy that way. Would not surprise if he even visited the Group with the sole intention of 'playing' them. That perspective needs some explaining.

With the Euro gang pushing the Russia threat envelope like never before, including their call for more and greater sanctions, Trump signaled that the NATO deadbeats were on their own. Their free ride was over. However, they still could pursue this folly but at their own demise; especially true now that the U.S. welfare safety net was pulled up. Specifically Trump criticized Germany. For all its economic might (leveraged at the expense of American taxpayers) Germany would from now on have to perform its saber rattling on Russia's borders using their own forged steel armaments and paid for by drawing down their massive U.S. Dollar trade surplus with America. Recent estimates place the aggregate amount well over $300 billion.

Frau Merkel got the message. The liddle yellow Deutsch kaninchen begrudgingly spread the 'unsettling' news across the Continent within hours of Trump's jet touching down in Washington. Her message was not so much alarmist as it was defiant. Maybe she expressed relief. Now that the American showed his 'America First' colors on Europe's hallowed ground (temporarily Brussels), she was free to declare her ascendancy to the globalist emperor's throne, which not to anyone's surprise resides in Berlin. Trump's intransigence, was to the EU a perfect storm ripe for exploitation. President Trump called out German comparative (no means competitive) economic advantage. To wit, the Germans stiffed NATO by not paying their fair share. That abrogation allowed Deutsch car manufacturers the necessary wiggle room to borrow new capital for re-tooling their factories, which in turn allowed them the luxury of exporting more Mercedes Benz and BMW cars to the American market. Trump's revelation was nothing short of sedition. How dare he tell the truth!

If the sting of Trump's blunt message on his view of the current state of NATO/EU was already too much to bear for the poor, beleaguered but skulking German 'Chancellor' what came next would surely send her reeling back to the safety of the Brussels Palace. Merkel appeared both dazed and confused from the latest battery. In re, Trump's strong and not so subtle hint that he had already made up his mind on 'climate change', his 'polite' audience prepared to brace for more shock waves; blitzkrieg if you like. The American people come first. Despite all the royal pageantry and high expectations from the avowed EU globalists and their assortment of loyal stooges from across the world, U.S. President Donald Trump would not ascribe to the economic and cultural suicide otherwise known as the Paris Climate Accord.

Before departing but after thanking the Euro crowd, which featured gang organizer Jean-Claude Junkers, for their hospitality, President Trump revealed his prescient moment. "I came here to study this subject. You will know my full response next week." Any betting man there already knew the score. The odds of Trump tilting 180 degrees towards Berlin, ahem, Paris were next to zero, emissions or otherwise.