When the US, UK and their fellow destroyers of nations embarked, in October last year, on erasing Iraq's ancient Mosul in order to save it, did they reflected on the enormity of the cost to humanity and history of their actions now and that of their genocidal, illegal invasion and fourteen year occupation - and counting? 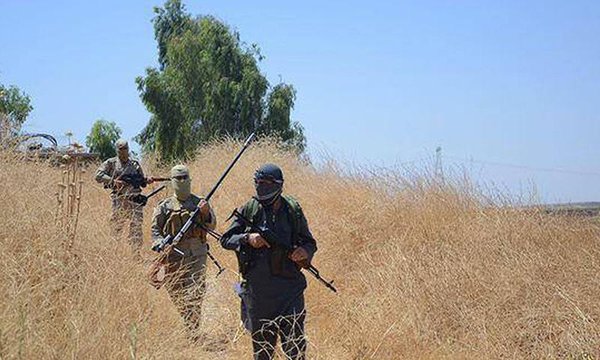 "In the United States today, the Declaration of Independence hangs on schoolroom walls, but foreign policy follows Machiavelli."

Mosul, situated on the Tigris River, was first mentioned in name by the Greek writer Xenophon in 401 BC, although the area was inhabited from probably the 25th century BC. As Fallujah, near destroyed by the US in 2004 was known as City of Mosques, Mosul has been known as City of Churches. The population however, has been richly diverse: Arabs, Assyrians, Armenians, Turkmens, Kurds, Yazidis, Shabakis, Mandeans, Kawliya, Circassians.

Sunni Islam has been the largest religion, but Salafism, Christianity, Shia Islam, Sufism, Yezidism, Shabakism, Yarsan and Mandeanism all coexisted in and around this ancient, hauntingly beautiful city.

Mosul, as so much of Iraq, has suffered unimaginably under ISIS - but it is hard to spot the difference from how Iraq suffered under the US and UK (and are again.) The US bombed the city during the 2003 invasion, murdered Saddam Hussein's two sons and fifteen year old grandson there in July 2003 - no Judge or jury, just US ISIS style summary executions - as across the nation.

Robert Fisk wrote of US atrocities in Iraq (2) as related to him by an American veteran. There is a US Army "Warrior creed" which: "allows no end to any conflict (but) total destruction of the 'enemy.' It allows no defeat... and does not allow one ever to stop fighting (lending itself to the idea of the 'long war.') It says nothing about following orders, it says nothing about obeying laws or showing restraint. It says nothing about dishonourable actions..."

In April this year, it was revealed  that the US Air Force on a bomb-fest over Mosul - and indeed wider Iraq and Syria - were operating under "looser rules of engagement." Moreover:

"Lt Gen McFarland, now orders air strikes that are expected to kill up to ten civilians without prior approval from U.S. Central Command ..." And this is "liberation" from ISIS? (Emphasis added.)

Presumably the family of eight reported killed by a US bomb in late October, including three children, one just two years old, were one of the General's "expected" kills.

Air strikes in Iraq and Syria have: " ... destroyed 6,000 buildings with over 40,000 bombs and missiles have inevitably killed much higher numbers of civilians." Apocalyptic horror. Of course US and UK presence in air and on the ground in Syria are entirely illegal.

So the people of Mosul and Syria's cities, towns and villages are hostage to ISIS/Daesh and other head chopping factions fighting with US weaponry. US forces on the ground are "advising" the Iraqi army - which has absorbed militias ever bit as terrorizing as ISIS. US forces themselves have, of course, a gruesome history of terror and gathering body parts as "souvenirs."

In Word War 11 it was skulls, ears, teeth; in Vietnam penises. In Afghanistan it was fingers "and other body parts"  and in Iraq it was reportedly fingers, with dead bodies being tied to US tanks in Fallujah and as Ross Caputi wrote (Guardian, 13th March 2012) "Some of my closest friends mutilated dead bodies, looted from the pockets of dead resistance fighters, destroyed homes, and killed civilians."

And ponder further on the US "liberation" of Mosul. As Nicholas J. Davis has written earlier this year, Award-winning Iraqi environmental scientist, Mosul-born Souad Al-Azzawi (Ph.D., Colorado School of Mines) compiled a partial list of air strikes on the city:

* Many government buildings have been destroyed. U.S. officials told USA Today, attacks are often conducted at night to minimize civilian casualties, but security guards and civilians in neighboring buildings have of course been killed.

*Telephone exchanges have been systematically bombed and destroyed.

(Note: Mosul University was one of the largest educational and research centres in the Middle East. Near unbelievably, the murderous ISIS primitives are thought to have destroyed over 8,000 books and 100,000 manuscripts - but the US destroyed near the entire faculty.)

*A mother and four children were killed in an air strike on a house in the Hay al Dhubat district of East Mosul on April 20th, next door to a house used by Islamic State that was undamaged.

*Twenty two civilians were killed in air strikes on houses in front of Mosul Medical College.

*Twenty civilians were killed and seventy wounded by air strikes on the Sunni Waqif building and nearby houses and shops.

*Banks and a bottling plant were bombed, more dead and maimed.

*An air strike on a fuel depot in an industrial area ignited an inferno with 150 casualties on 18th April.

*Bombs have damaged a food warehouse, power stations and sub-stations in West Mosul, and flour mills, a pharmaceutical factory, auto repair shops and other workshops across Mosul.

More US destruction and arguably war crimes are listed.

To further assess what a US "freed" Mosul might look like, here a brief summary of what Fallujah's 2004 "freedom" cost :

On Sunday 28th May US Secretary of Defence James Mattis stated that the U.S. military is to use "annihilation tactics" to defeat ISIS fighters in Mosul telling CBS's "Face the Nation" that "civilian casualties are a fact of life in this sort of situation."

Mattis knows a bit about "annihilation tactics", he headed Camp Pendleton's Ist Marine Division in Iraq which were integral to the massacres in Fallujah in April and November 2004.

Speaking to a group of soldiers about how to behave in Iraq during a 2003 speech he ordered: "Be polite, be professional, but have a plan to kill everybody you meet." Fallujah's mass graves are silent witness to the diligent obedience to Mattis's orders.

When the US is not shooting and bombing Mosul's families in the cursed name of liberation, it is displacing them. Figures to 19th May show in excess of 526,000 men, women and children fleeing their homes and all they own. In the month to 2nd December 2016 over one thousand civilians were killed. On May 26th One hundred and five civilians were killed. On 30th May in the Az Zanjili district of the city, at least two hundred people were reportedly killed in a bombing lasting several hours and dozens of homes "completely flattened." (Al Araby, 30th May.) The figures in human cost, hour by hour, day after day, would surely fill volumes.

On 27th May the US had dropped leaflets telling people to leave the Old City, Mosul's ancient heart, a city referred to as Al Fayha (the Paradise) and the "Pearl of the North." US forces however, care as little as ISIS for life, limb or the Middle East's haunting Pearls and Paradises.

Mosul Will Be "Destroyed"

Hoshyar Zebari, Iraq's former Deputy Prime Minister, Finance Minister and Minister of Foreign Affairs, has stated that Mosul, formerly home to two million souls, will be completely "destroyed" and "uninhabitable" by the time the terrorists have been driven out. (Independent, 15th February 2017.) Another ancient jewel destroyed in the name of "freedom.".

Behind the figures are people living the unimaginable. As this was being finished, a message came from a Mosul-born friend, who writes:

"The American Coalition are lying ... Civilians in Mosul are getting killed by the bombing and Iraqi and coalition ground missiles. They keep bombing each area for one or two weeks killing hundred of civilians and when the area is empty from any snipers ...

"Two of my mother's cousins houses in Thawrah area were bombed three days ago. Fourteen family members died. Four women, eight children the oldest is ten, and two men. People reclaimed seven bodies and other seven still under rubble. They couldn't save any survivor under the rubble because the bombings are still going on intensively on the area.

"Those are my relatives and I know very well that they have nothing to do with IS.

"This is the New US/(Prime Minister) Abadi strategy ... In Hay al Refaiae, last week my other cousins moved into five houses with their families with also an eighty seven year old old mother to avoid the American Coalition bombing.  All five houses were destroyed - with the whole surrounding area. Three of them were injured."

Another letter was sent to a friend by his father, also used with permission and gratitude:

"People ask me: Why do I get so angry?

"Below is a scene today from Mosul, my home town. It is a scene repeated a thousand times over, all around Mosul. Yesterday the U.S. Air Force undertook 158 bombing missions over the city of Mosul. Every bridge across the Tigris in Mosul is now destroyed, the Sugar Factory has been bombed, a 5-Story medical centre has been demolished, the entire airport has become rubble, much of the city's infra structure including water and electricity have ceased to function, the University of Mosul buildings have been levelled, thousands of homes have been rendered unlivable, and of course no one is counting the civilian dead and the refugees.

"And all for what? To destroy the Islamic State? Is this the same so-called Islamic State whose factions have been supported, financed, and trained by the CIA over the past five years in order to bring about regime change in Syria?

"Since 2003, the United States has bombed Iraq, Syria, Libya, Yemen, Somalia, Sudan, Afghanistan ... and presently it has its eye focused on Iran. And yet, we have the gall and temerity to talk about the savagery and barbarism of the Mongolian hordes of eight centuries ago.

"I really do wonder why people keep asking me: Why do I get so angry?"

In the title I query the outcome of this criminal decimation and cite Hiroshima. Parts of Iraq already have higher cancer and birth defect statistics than Hiroshima and Nagasaki, linked to the depleted uranium weapons used by the US and UK from 1991 to now.

Donald Trump has demonstrated his casual fecklessness with weapons of mass destruction by dropping the largest "conventional" weapon ever used on Afghanistan and fifty nine radioactive and chemically toxic Tomahawk Cruise missiles on Syria, neither country had been proved of doing anything but simply existing.

On the Presidential campaign trail, Mark Halperin of Bloomberg asked  Donald Trump, whether he would use nuclear weapons against ISIS. "Well, I'm never going to rule anything out", replied Trump. When pushed by Chris Matthews of MSNBC on this issue, Trump said: "Somebody hits us within ISIS - you wouldn't fight back with a nuke?"

Iraq is near destroyed on the Blair and Bush lies that Saddam had weapons of mass destruction. Trump does and it seems, is prepared to think the unthinkable. Will the UN, the relevant world bodies, the "international community" wake up, before it is too late, before a swathe of Iraq and Syria's people are vapourised, with twenty seven centuries of history?