The Wages of War is Death

"For the Wages of Sin is Death." So says the Bible. It seems to be a reasonable, common sense appraisal of human life or even an application of Newton's laws of physics regarding action and reaction. It is also a way of looking at the mystery of karma. 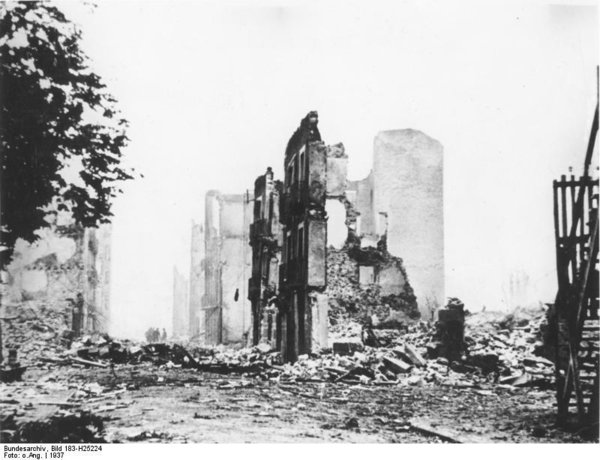 Yet the meaning of such truisms, it can be argued, apply only to the living and not the dead. Corpses do not have a habit of holding meaningful discussions on War and Peace nor are cadavers ever seen typing at a keyboard about their experience in the realm of the undead or the hereafter. From our living perspective, the dead are just plain dead.

So it is not a far cry to project that biblical verse about Sin, Wages, and Death and consider if it also applies to War. One could always argue that war may be an appropriate response to defend one's family, home, freedom and country and therefore is not a sin, but as to Death itself as its wages or payments rendered, either way, right or wrong, the result is the same. War means Death.

Does this mean everyone dies in a war? Not always physically or in any case not right away, but now in our highly technologically capable world this is exactly what could happen.

Reasonable minds and cooler heads may prevail and prevent a nuclear holocaust, but once again there may be more nefarious and covert forces in play that go beyond humanity's primitive and perceived past evils of war that this modern world may not be accustomed to.

War may be poetically described as an entrance or as one of the "Gates of Hell."  The direct participants in warfare may view it as the Main Chamber of Hell itself.  Scary? It should be because that is where pain and suffering can reach their greatest heights or better yet their lowest depths

But is there some usual scenario or some flowchart that can show us how War is about to break out?

First Come The War of Words

Whether it is a nuclear holocaust, a global conflagration, or a brutal street fight, there is always something said or done that provokes each side into a feeling of righteous indignation. One side may indeed be in the right more than the other and sometimes one opponent may even be downright criminal and completely at fault. It is also possible that each side may share some of the blame. Nonetheless, there will always be that initial provocation that induces the exchange of words that grow increasingly more hostile in the plain old battle of wills.

Shouting matches often develop very quickly. In the case of geopolitics, propaganda flows faster and faster almost always imbued with false accusations and ill will and then communication ceases and the parties talk at each other rather than to each other.

Next weapons begin to be displayed, ranging anywhere from fists to multi-warhead nuclear ballistic missiles. Shaking a fist at one's adversary, picking up a club or the classic lifting of a sword and shaking it before the enemy are common responses.

Military parades and missile testing are prime examples of how entire nations rattle sabers. At these preliminary stages of words and saber rattling the idea is, most often, to frighten the adversary and force them to flee or rethink hostilities.

When there is no option to flee, a little physical coercion will inevitably ensue. In a street fight, a push with the hands, the clunking of foreheads, a slap or a punch in the face is not atypical. With military troops, a few gunshots, an artillery blast, or even a conventional missile strike is also not atypical. These are the skirmishes and first blows exchanged in order to make the enemy think twice before continuing the battle.

When push comes to shove and both sides engage in these opening forays of physical contact, the escalation is rapid and some of the combatants may become seriously injured or even die.

The battles now begin to rage. There is no longer logic or reason except for the strategy of how to survive and how to kill the enemy more effectively. More so, How to Win!

The fight becomes tooth and nail, clawing and gouging on all sides to preserve what remnants of viable life will be left beyond the ongoing conflict from which a New World Disorder has emerged. Technological advances speed up the processes of war and killing as both sides try to tilt the playing field in their favor.

The stench of death is now pervasive worldwide.

How the Worldwide Nuclear War Emerges

Lurking in the dark recesses of the minds of world leaders are the pertinent questions:

"Do we now go nuclear in order to win the war?"

"Will we survive if the war continues?"

"Is a tie the best we can hope for where everyone perishes?"

Right away, flashes of bright lights begin a volley of computer cyber attacks. Control of communications is soon lost to relentless and ongoing electronic flashes that soon leave the world without internet access, leaving only local lighting and emergency energy sources functional, the world enters a stage of darkness.

Sirens begin to blare, nuclear armed ballistic missiles are launched from and towards every major continent and then into almost every world capital. Explosions are both heard and seen at a distance and those in close proximity of the detonations are reduced to ashes. The toll of the dead begins to rise astronomically.

The night begins to take on the ominous dark green hue of poison and death while the reflection of the day sky is blood red exposing the macabre light of the worldwide conflagration with its radioactive emissions. The screams of death and the cries of the dying are heard everywhere and then: SILENCE.

What a way to go! Death is the payoff for the hubris of our human species' disrespect of life.

Mankind now goes the way of the dinosaur but by its own hand and not from a cosmic event.

Or is it a cosmic event after all? Did we as a species violate some higher laws of the vast and arguably infinite Universe? These are not violations or some man made statutes, but real and existential laws that govern every atom in the cosmos.

Who started this trouble? Why did it go so far? What could have prevented it?

Without doubt The Wages of War is Death.

Think well my friends, we can do much better.