"Making America Great Again", by reducing the world to Ashes?

As US threats ratchet up towards North Korea, the latest hinging on the accusation that the country attempted a further ballistic missile test on the annual Day of the Sun, the annual national holiday holiday commemorating the birth of the country's founder and Kim Jong Un's grandfather, Kim Il Sung. 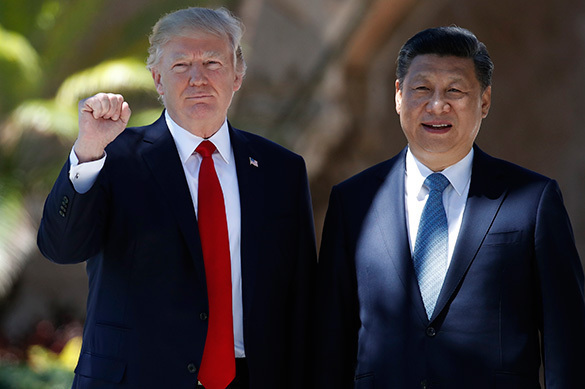 "In the event of a nuclear war, there will be no chances, there will be no survivors - all will be obliterated... nuclear devastation is not science fiction - it is a matter of fact. The world now stands on the brink of the final abyss. Let us all resolve to take all possible practical steps to ensure that we do not, through our own folly, go over the edge." Former First Sea Lord, Lord Louis Mountbatten (1900-1979) Strasbourg, 11 May 1979."

As US threats ratchet up towards North Korea, the latest hinging on the accusation that the country attempted a further ballistic missile test on the annual Day of the Sun, the annual national holiday holiday commemorating the birth of the country's founder and Kim Jong Un's grandfather, Kim Il Sung.

Without the slightest proof produced by the US that such a test was attempted, yet alone a nuclear one, Donald Trump's language and that of his fiefdom have been on the level of a bar room brawl rather than statesmanlike. The sabre rattling, intemperate recklessness in threatening to do "whatever it takes" with serially verbally challenged spokesman, Sean Spicer calling the invisible test "an unsuccessful military attack", is sending shivers down governmental and national spines across the globe. "All our options are on the table", said National Security Advisor H.R. McMaster.

Friends and family and chocolate cake

The Presidency being a family affair, Trump's son Eric chipped in on Fox and Friends with:

"You have to have massive backbone when it comes to dealing with awful, awful dictators who don't like us, don't like our way of life."

Straight out of the George W. Bush handbook: "They hate our way of life." Wait for: "You are either with us, or you are with the terrorists."

But again, why no proof of North Korea's much vaunted threatening action? The US has: "an existing armada of spy planes and drones on and around the Korean Peninsula."

Wowza! The Pentagon speaks! It MUST be true!

Moreover: "The Pentagon's Space-Based Infrared System (SBIRS) employs multiple types of satellites and sensors to address some of these issues and provide greater coverage. According to defense contractor Lockheed Martin, the constellation can watch for the heat signature of enemy missile launches and track them in flight, gather details about those weapons and their capabilities ...

"Closer to earth, spy planes and drones are almost constantly zipping around North Korea. The Air Force and the Army have spy planes and unmanned reconnaissance aircraft permanently deployed in the region ...

"Satellite data links, known as Senior Span and Senior Spur, mean the spy planes can send back some of this information back to base while still in flight so analyst can begin picking it apart. The Air Force has the 694th Intelligence, Surveillance and Reconnaissance Group at Osan in part to help 'exploit' this kind of data."

There is also: " ... the U.S. Navy's Task Force 72, the unit overseeing the U.S. Seventh Fleet's aerial patrol and reconnaissance forces. P-3C Orion and P-8A Poseidon patrol aircraft and EP-3E Aries II spy planes rotate through deployments to the unit's bases at Naval Air Stations Atsugi and Misawa Air Base in Japan. From there, they make routine trips to South Korea proper for training exercises. The EP-3E Aries IIs are dedicated intelligence gathers, but all three types could help monitor North Korean developments."

It is also worth quoting former UN weapons Inspector in Iraq, Scott Ritter back in 2002, seven months before the illegal invasion and destruction of Iraq (ongoing) describing sophistication of monitoring, with warning words on how politics can cause irreversible disaster:

"And we had in place means to monitor - both from vehicles and from the air - the gamma rays that accompany attempts to enrich uranium or plutonium. We never found anything. We can say unequivocally that the industrial infrastructure needed by Iraq to produce nuclear weapons had been eliminated."

Further: "We eliminated the nuclear programme, and for Iraq to have reconstituted it would require undertaking activities eminently detectable by intelligence services." Equally certain is that North Korea's activities are equally detectible.

"It is not just heat", states Ritter, "centrifuge facilities emit gamma radiation, as well as many other frequencies. It is detectable. Iraq could not get around this."

"Our radar detects the tests, we know what the characteristics are, and we know there's nothing to be worried about."

In 2015, Scott Ritter wrote a further detailed article with facts which surely apply to North Korea (3.) Arriving in Iraq their ground vehicles were accompanied above by: "... sensor-laden helicopters and U-2 high-altitude reconnaissance aircraft above and high-resolution spy satellites providing further imagery ... satellite imagery detected a still existing covert missile force ..."

He concludes:  " ... in Iraq ... the end result was a war based on flawed intelligence and baseless accusations that left many thousands dead and a region in turmoil."

If the US makes a nuclear attack on North Korea, the megalomaniacal, narcissistic and seemingly frighteningly ill informed Donald Trump - who, in an early telephone call to President Putin was reported as having to put his hand over the mouthpiece and ask someone what the START Treaty (Strategic Arms Reduction Treaty, 4) was - could trigger the unimaginable.

"In our new age of terrifying, lethal gadgets, which supplanted so swiftly the old one, the first great aggressive war, if it should come, will be launched by suicidal little madmen pressing an electronic button.

"Such a war will not last long and none will ever follow it. There will be no conquerors and no conquests, but only the charred bones of the dead on and uninhabited planet."