Donald Trump and the genius of idiocy

Several decades ago, the Monty Python comedy troupe did a skit revolving around "the village idiot."  Part of the humor was that the "idiot" (in between falling off  garden walls to entertain passersby) engaged the interviewer in a highly intellectual discussion about how the idiot's role in society is to provide others with a scapegoat to ridicule and blame. 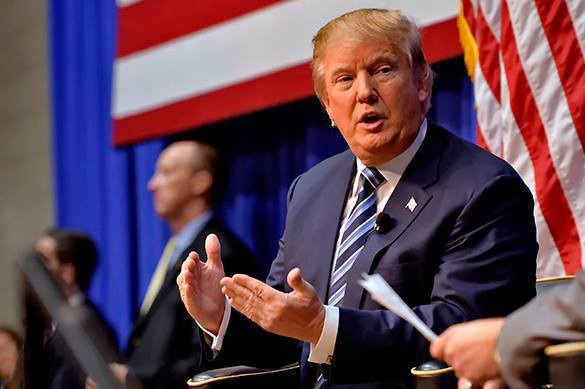 Unfortunately, real life idiocy is not so comical, because people often adopt fallacious illusions of "superiority" simply by looking down on those of different races, religions, sexual orientations, etc.  These illusions frequently lead to the detrimental belief that, being innately "superior," one does not need to take any other steps to improve his/her station in life.

But idiocy cannot prosper without ignorance, and, as I discussed in several previous Pravda.Ru articles, ignorance is having the intellectual capacity to understand both sides of an issue, but being too apathetic to do so, or too narrow-minded to research or listen to any facts or opinions that contradict one's beliefs.

Adolph Hitler's "great lie theory" argues that idiocy and ignorance flourishes in even highly intelligent societies.  All a leader has to do is transform a fictitious statement into a slogan, repeat it over and over, and attack the "patriotism" of anyone who questions it.

One drawback to this theory, however, is that intellectuals can recognize the mendaciousness of such slogans and easily refute them.  So the solution is to silence the intellectuals.

Even in America, with all its pretensions about "freedom of the press," this is a relatively easy task to accomplish, because, by their very structure and mission, corporate-controlled media actually thrive on the exploitation and dissemination of idiocy and the ignorance it engenders.

The first part of this structure is the quest for ratings and profits, which are generally created by "controversy."  Not real controversy, of course, because this hurts the "bottom-line."  Instead corporate-controlled media revel in "pseudo-controversies" cunningly manufactured to dupe readers, viewers, and listeners into believing they are receiving actual "news."

This is why Donald Trump is a goldmine to these media.  His often outrageous statements and antics are not only the clay that molds headlines, they are the impetus that inspire corporate-controlled media to seek out and quote idiots, like Sarah Palin, Rudy Giuliani, Bill O'Reilly, and others of their ilk.

The second part of this structure is the "cult of celebrity" propagated by corporate-controlled media.  The parent companies of numerous news outlets also own movie studios, television stations, and/or record companies; thus, there is a financial incentive to keep the faces and names of celebrities in the public eye.

This is evidenced by the fact that almost immediately after Trump makes an outrageous statement, there are a plethora of articles quoting the responses of celebrities.  In fact, at the time of this writing, several such articles are discussing Clint Eastwood's opinions about Trump and "political correctness."

Quite frankly, unless the public is aware that an outspoken celebrity has some education, experience, or in-depth knowledge about the topic he/she is discussing, I don't give a damn what they think.  This is not to say that they don't have a right to express their opinions, only that these opinions are not deserving of any more weight than those expressed by any layperson.

A simple solution corporate-controlled media could employ if they honestly wanted to examine an issue is to seek out the opinions of unbiased experts and academics.  But this is anathema to the final part of their structure:  the incessant demand for "sound-bites" and other types of brevity.

Most social problems, and/or their proposed solutions, are highly complex, and thus not conducive to brief interviews or abbreviated newspaper articles.  In addition, uninterrupted, learned analyses are less valuable to ratings and profits than "talking heads" screaming at, feuding with, or yelling over each other.

A popular saying states there are three forms of criticism:  good, which is favored because it praises one's work; bad, which keeps one's name in the public eye; and none, which essentially means a person or event isn't even newsworthy enough to be discussed.

Like it or not, Trump's antics, and the criticisms of them, have kept him in the public eye.  One recent online newspaper, for example, had eight headlines listed in its political section, and the name "Trump" was in six of them.

First, there is the very real prospect of provoking the reverse psychology of voters. Whether Americans want to acknowledge this phenomenon or not, it often seems that the more they are warned about the drawbacks or risks of taking or supporting some form of action, the more likely they are to attempt or support it, even when it is harmful to their personal interests.  I'm not sure if this is due to the mythical "rugged individualism" that allegedly fuels America, or if it is because of the very human instinct to resent being told what to do.  But whatever the reason, the result could be that the incessant warnings about the dangers of a Trump presidency might actually be the catalyst that creates it.

Naturally, to counter this argument, the corporate-controlled media will persistently refer to the "polls," which currently have Hillary Clinton in the lead.  But, as the Brexit experience taught the world, polls can be inaccurate, and, in some cases, intentionally deceptive.

In other words, many prospective voters who may be hesitant to openly support Trump will have no inhibitions about doing so in the anonymity of the voting booth.

So, regardless of who wins in November, the real winner will be corporate-controlled media's enduring culture of idiocy, the ignorance it engenders, and the ability of demagogues and megalomaniacs to exploit both. To paraphrase King Pyrrhus of Epirus, if there are too many "victories" like this, everything will be lost.