That was another great reality TV-show, wasn't it? Some 130 dead, and still counting, real tears and emotions by real people, in real time. Bombs, guns, blood, gore, shreds of flesh and bone, gory details. Muslim terrorists (passports conveniently supplied for easy identification), police, terrified citizens, mayhem, chaos. A real opportunity to make a powerful speech, announce some drastic decisions and pose as a real statesman and aspiring war leader. What more could an unpopular president wish for? 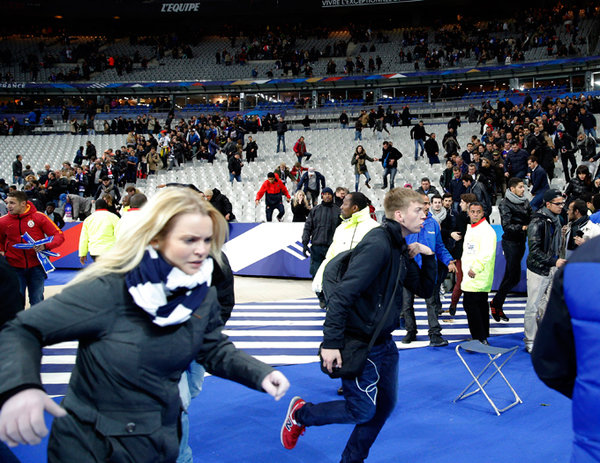 Francois Hollande got it all on Friday 13 November, at the very moment he needed it. To make sure the show would proceed well, French police conducted an exercise that very morning, closing borders and stepping up security in Paris. (Please, bear in mind that military exercises coincided with 9/11, 7/7 and even the recent Russian airliner crash over the Sinai Peninsula).

The show was a resounding success: the whole world was watching breathlessly as events unfolded. There was a lot to see: chaos and suspense at the football stadium, where Hollande himself was watching the game, but fortunately, the fragmentation bomb did not go off. Suspense also at the Bataclan Theater, where awful things happened. Pure horror! The kind of horror, for instance, recently unleashed by the US on a hospital of Doctors Without Borders in distant Afghanistan. But, lo and behold, here you could almost see the horror directly on your screen. And in Paris the horror was not a "mistake" as the Obama regime would have us believe.

And there was more: drive by shootings in several streets and avenues. Sort of like being bombed from the air, but in a more horizontal way. The kind of thing Syrians, Yemenites, Iraqis, Libyans, Afghans, and Palestinians are used to because it happens to them quite regularly. It seemed as if war had come to the very doorstep of Parisians. A kind of Charlie Hebdo show, but even bloodier and more elaborate. A kind of French 9/11, as correctly predicted by Paris-Match on 2 October. Some say it was also predicted last January by The Economist on its cover replete with weird symbolism. Even more uncanny is the tweet (11 November) by @PZbooks (PZFeed Ebooks), an account that was subsequently blocked by Twitter. The tweet read: "BREAKING: Death toll from Paris terror attack rises to at least 120 with at least 270 injured." Moreover, French security actually knew the identities of the perpetrators before the attacks took place, yet did nothing to prevent them.

No doubt that is why, within minutes, TV reporters and radio reporters, police and security services knew it was ISIS operatives from Syria and Iraq! As if to underscore how right they were, a Syrian passport was found near the blown apart remains of one of the terrorists. The poor guy must have been a law abiding citizen at heart because he was carrying a proper ID (you never know how it comes in handy). And then all of a sudden, the passport is declared to be a fake.

To tell you the truth, the entire Paris terror show was a fake, a false flag, a staged event, a Punch and Judy show, pure theater, a hoax. But a show with real victims. Like the circus games in the Roman Empire, all show, with real blood and gore. The only difference being that back then, there was no TV and no internet.

The main question concerning the recent Paris events thus becomes: why would the French government organize a terror event and kill dozens of its own citizens?

The answer is right there in front of you: in the first place, to regain popularity and avoid a defeat at the upcoming regional elections. National Front leader Marine Le Pen, running on a platform of anti-immigration, anti-Islam policies, was far ahead in the polls. Now that President Francois Hollande has hijacked her program, Le Pen's victory is no longer assured, to say the least. And in order to make it even harder for her to win, Hollande is seeking to extend the state of emergency (martial law) in France, declared in the wake of the Paris events. That will surely influence the election outcome.

Secondly, the Paris events created the justification for France to renew its bombing campaign in its former colony of Syria, in clear violation of international law.

Third, now that the illegal sanctions (in violation of WTO rules) against Russia are causing widespread misery and desperation among French farmers and other exporters, Hollande can use the Paris events to divert attention and to continue his domestic policies of divide and rule. No better instrument than to create an "Islamic" terror event. This will make many Frenchmen fear and hate the millions of Muslims in their midst. And the government then whips up this anxiety and hate by repeating over and over again that Muslims are OK but that the extremists among them are not. There is no better way to increase distrust and hatred than this kind of double talk.

The question  remains as to when and where we will see the next episode of the Prime Time Terror Show. Will it be France? Germany? The Netherlands? Belgium? Sweden? Or will it be the US that needs another 9/11 show to establish a police state?