Greece: The system versus the people

So what a wonderful system the European Union in its utter wisdom has created for the people of the Old Continent in general and the Greeks, Portuguese and Spanish in particular. A North-South divide, the Haves and the Have Nots, a two-speed, two-tier continent of the Rich and the Poor. Two Lands, Two Peoples, One Leader. Deutschland über Alles! 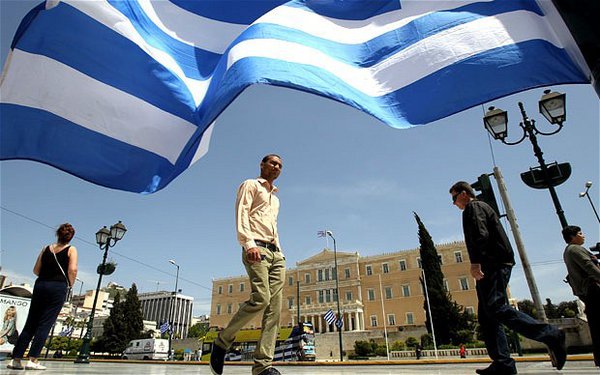 It is a not just a shame the way Europe has treated Greece, it is a scandal. Even more so, the callousness and sheer disrespect that everyone from Government officials to the media to the common person in the street have shown towards Greece and the Greeks, labelling them "irresponsible", "lazy" and "spendthrifts", an attitude so clear to see in the derogatory and insulting acronym PIGS given to Portugal, Ireland, Greece and Spain.

In fact, I have far more respect for any pig than I have for those using such an acronym or adopting this holier-than-thou attitude. I shall explain.

It is not the fault of the Greek people. Then...

It is not the fault of the Greek people that they are in this situation, namely being forced to take out loans (with interest rates attached) to pay the interest on previous loans. It is a downwards spiral from which the country will not escape, a spiral towards breaking point which, the later it happens, the worse the effects will be. The Greek people have only done what they were supposed to do. When they were told to study, they studied. When they were told to work, they worked. And while they did this, PASOK and New Democracy, the zigzag alternative supposedly to the left and right of the center line, mismanaged the country to an extent which would see any manager in the private sector fired after the second week... or rather, day.

Especially when the measures proposed are made by technocrats from the European Central Bank, the European Union Eurocrats (a race of Untermenschen) and the IMF, none of which have ever been confronted by the daily reality of the average citizen.

In fact to be accepted in such high public office, people should be put through a "Citizenship Course", meaning they should have to live different realities during a period of one year: coping in social housing on unemployment subsidy, coping as unemployed without a subsidy, coping as a pensioner, coping on a minimum salary, being regarded as an ethnic minority, sending emails to public entities and not getting the courtesy of a reply, living the reality of the people for whom they will take concrete decisions with concrete consequences on EXCEL sheets, something which should be banned from people-management.

So what a wonderful idea it was to impose German constraints on southern European economies which had taken five thousand years to develop, and watch them being nurtured into a condition in which they had to borrow money to pay the interest on previous loans, with more interest tails entailed. What a wonderful, wacky EU in which fifty to sixty per cent of youth in some areas are unemployed (the "endemic jobless"), in which 30 per cent of the workforce in others is both unemployed and out of education (the "neither-nor" population) and the majority of those who get jobs these days, in Southern Europe at least, receive a paltry salary of 500 Euro (the "Generation of 500 Euros") which is never going to be enough to buy a house or start a family, and which sees people living at home with their parents well into their forties. And many of those who are not part of the endemic jobless, the neither-nors or the Generation of 500 Euros are homeless or hungry.

What a wonderful project, imposed on millions of people in a top-down, know-it-all approach without explaining the consequences of the actions, then when things start going wrong, stating that the consequences are unknown (how irresponsible is that? Most managers in the private sector would be fired for incompetence).

How can one call a system which does not provide jobs for all, which provides miserable pensions, job insecurity, insecurity on the streets, difficulty in finding and keeping a home a success, one in which the healthcare systems are more and more turning into businesses, where dental care is considered a luxury, one in which education has already become a business at all levels?

In fact, to such an extent has it become a business that today, for the first time I am having this very week cases brought to my attention of demands for payment to publish academic papers in academic journals. The way it works is like this. An academic needs to justify her/his position in a University by teaching and/or doing research in her/his field of activity and this research is channeled into academic papers, published in academic magazines called journals. The ranking of these journals (often graded A,B or C) dictates the number of points the academic receives for the work, and usually these points count towards the individual and group classification in a periodic assessment process.

The fact that today, journals give preference to papers whose authors have paid up to 500 USD for publication or to papers in databases which they enter because they have paid 500 USD, means that the entire academic process has been assimilated into big business, as has healthcare, transportation and every other facet of public life and public services.

For Greece, these days may well be the end of a cycle but this means the beginning of another. Suppose that instead of deriding Greece and ridiculing Greece and kicking Greece when it is down, we gave Greece a hand, helped Greece instead of creating obstacles, and asked Greece to show us a way, since we so clearly have not found one collectively.