Another story that is being overlooked, another time the international community prefers to turn the other way and look forward to summer holiday bookings, the six-ess silly season, the sun, sand, sea and sex package. Meanwhile in South Sudan, women and little girls are being raped and killed... by little boys wielding automatic weapons. 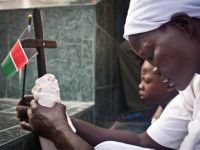 Two years after the conflict in South Sudan exploded, UNICEF warns that the situation has spun out of control and if anything, has got worse over time. This week's latest atrocity: dozens of children abducted, killed, raped and tortured, many of them girls and young women and the perpetrators in some cases are reported to be teenage boys.

The alert was given on Tuesday by Jonathan Veitch, UNICEF Representative in South Sudan, speaking from the capital city, Juba, claiming that there is "a deliberate targeting of children" and that over the past two weeks, dozens of children were killed, raped or abducted in Unity State. One girl managed to escape to a UN Mission clutching her eight-month-old twins, and claimed that the assailants were all boys aged sixteen to seventeen who had burst into the village and opened fire on everyone.

Other eye witnesses have spoken of entire villages being torched and many children falling victims in the most horrific scenes of violence and cruelty carried out by men and boys in military and civilian clothing. Jonathan Veitch quoted a figure of 13,000 children already documented, having been inducted into the ranks of the Sudan People's Liberation Army (SPLA), claimed to be responsible for the attacks and other armed groups.

Sources working in the UNO claim that the situation is becoming complex in the refugee camps because tribal differences and tensions are coming to the fore. In a nutshell, the conflict is deteriorating and while in some areas people are returning home from the refugee camps, large-scale hostilities are being carried out.

On Monday the UN Security Council expressed its grave concern at the widespread violence between Government forces and opposition groups in Unity State which has recently caused the displacement of over 100,000 persons and which has affected a third of a million people. Thousands of homes have been torched and over half a million people have been deprived of much-needed aid.