It is reported that the United States Secretary of State Mr. John Kerry handed President Putin a list of quotes in the Russian media which were hostile to the position defended by Washington in international affairs, yet another clear display of pig-faced insolence from one who is supposed to be his country's leading diplomat. 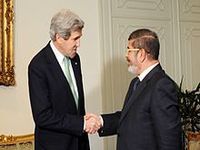 If Mr. John Kerry has a problem with what I write in these lines, then I will wear that medal with pride. If some of my lines were in the dossier he presented to President Putin, then I thank him for proving that I have done my job. If Mr. John Kerry has a problem with freedom of expression, then I would suggest he restrict his idiosyncrasies to the corporate media in his own country and those which spend their time crawling round his legs as they spend two per cent of their GDP on the NATO military and administrative budget.

After all, by and large, to the media in the USA and UK in particular can be applied the "upside down" law, which is take anything they say, turn it inside out and upside down, stand it on its head and you will get something nearer to the truth than the original story.

Let us take the piece in Britain's The Guardian newspaper, for instance. The Guardian? Yes you know, the one that reported on my reply to that Australian Abbott person when he threatened to "shirt-front" President Putin, quoting a biography of me without doing a shred of research, a drunken spoof bio written by a friend just before he engraved "PRINT SCREEN" onto his forehead by collapsing over his keyboard. Reporting on Kerry's meeting with President Putin, the same newspaper stated the following:

"Putin said the Russian people would already remember the solidarity of Britain, the US and other allies during the second world war, which in Russia is known as the great patriotic war and does not include the two years from 1939 to 1941 in which the Soviet Union was allied with Nazi Germany".

So Britain was "allied" with Nazi Germany, one supposes, when Neville Chamberlain came back from Berlin waving slips of paper claiming "peace in our time"? And since when does a Non-Aggression Pact become a Treaty of Alliance? The "Bugger the Research" Guardian, ladies and gentlemen, has been assimilated and has become a prime example of what John Kerry wants - a mouthpiece to vomit forth the vitriol of the lobbies which control the foreign policies of the USA and its Poodles in Europe, which represent in turn the corporate interests which close ranks around any Government elected from the two options presented in an election, center-right and center-left. And they spend, ladies and gentlemen, each and every single year, one point two trillion dollars on their military budget.

So if Mr. John Kerry has a problem with the truth, let him restrict his censorial fantasies to his own country, for in Russia there exists something called freedom of expression and anyway, who the hell is he to dictate anything to anyone?

If there were quotes in the Russian media against the policies of the United States of American, I wonder why? So let's start with Afghanistan, shall we, you know the country where the United States of America used bin Laden as a CIA asset fighting against the Soviet-backed progressive Governments which provided full human rights, women's rights and attempted to distribute the country's wealth among the people instead of seeing it clasped greedily in the hands of the ruling elites? And so if the USA has the duty to rush in and help the Putsch Government in Ukraine because they asked for help, then the USSR likewise had the duty to help the Afghan Government being assailed by western-backed terrorists pouring into the country from Northern Pakistan and aided and abetted by the West.

Or doesn't it work both ways?

Mr. Kerry, as a Vietnam veteran, would know all about that of course, or shall we stand that story on its head as well? I know! How about the Americans were helping the Vietnamese farmers, their wives and children, to see the sunlight more clearly by blasting away the foliage on the trees and heck, if any kids were standing in the way then (chuckle) they shouldn't have been there, should they? A little bit of Agent Orange never did anyone any harm, eh what? Adds fiber to their character, makes a man out of them!

Like those hundreds of thousands of "Japs" in Hiroshima and Nagasaki, eh Mr. Kerry? Specially those babies lying in their cots, specially the dogs lying in the yard, specially the old folk crippled with arthritis who couldn't move an inch to save themselves when some American coward blasted their lives away with an A-Bomb. Yeah, I guess we should all just stand back and applaud.

Not doing that well so far are we, Mr. Kerry? OK then let's move on to Africa. Libya was a nice one, eh Mr. Kerry? How to turn the country with the highest Human Development Index into abject and utter chaos where your country's own ambassador was lynched and burnt by the very terrorists your country used to oust the Jamahiriya Government and replace it with what?

The actions of your country and its sickening Poodles in Europe has turned Libya into a haven of human traffickers and terrorists, making people yearn for the stability of the Gaddafi period. The instability in Libya has made the lives of millions of people a misery. God Bless America, eh?

So how about we move on to the Old Continent, what was it your assistant Secretary of State Victoria Nuland said? "F*** the EU"? I said, "F*ck the EU", was that it? Or was it *uck the EU? Whoops, Fu*k the EU, oh I am sorry, fuc* the EU?

So let's move on to Ukraine, the country in which the good ol' US of A yet again interfered and where it yet again sowed chaos. Why is it that everything Washington touches turns to excrement? Ukraine, where the democratically elected President Yanukovich was ousted by thugs, Fascists and those boasting about their ties to terrorists, where death threats were made against Russians and Jews, where the same thugs were firing against the police to get a reaction, the same thugs were firing against their own fellow protesters to cause martyrs...

Ukraine, where multiple voting was used in Parliament rendering any decisions illegal under Ukrainian law; Ukraine, whose Republic of Crimea's Parliament became the legally empowered entity after the illegal removal of President Yanukovich and which organized the free and fair referendum in which its population voted to return to Russia. Or don't you believe in expressions of democracy either, Mr. Kerry given that you apparently have an issue with freedom of expression?

What was that about improving relations, Mr. Kerry? And er... what's this I hear about Islamist factions being prepared for action in Crimea? Or was that only a rumor? I mean, given that you're all hell-bent on "improving Russian-American relations", and all that?