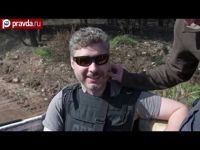 "Ye are of your father the devil, and the lusts of your father ye will do. He was a murderer from the beginning, and abode not in the truth, because there is no truth in him. When he speaketh a lie, he speaketh of his own: for he is a liar, and the father of it."

From the moment of taking power, the Kiev junta has been lying, caught time, after time, after time. So why was anyone ready to take them, these murderers and destroyers, at their word? Indeed, their entire presence in Ukraine is an affront to all norms of behavior, as these US hand picked and trained agents violently overthrew the democratically elected government of Ukraine on behalf of their US handlers so that they could profit from selling off all the assets and resources of the country while the people would slip into a hell of austerity, higher prices, unemployment and constant violence.

At the very beginning, I brought to this space the insanity of one of the junta's leaders, Arsen Avakov. I pointed out that Avakov believes in human sacrifice, that Ukraine needs "atonement" in the form of human lives, which explains why he is directing a Genocidal, murderous campaign in Novorossiya, committing crimes against humanity, war crimes and crimes against peace.

Ukraine: When the Lunatics Run the Asylum

In these few days talking a lot with our zone ATU - from general to soldier. And I want to say a few words about the truly important things. War cannot generate light feelings. But we can generate cleansing. False and superficial burns in the fire of war very quickly - as if deliberately leaving space THIS .. Through disorder and pain, through the death of comrades and the need to kill in response, through fear for their relatives, through observation of grief, people deprived of their home .. all not just in this war, and this purification and redemption for everyone - you need as a prerequisite of victory .. Atonement. It comes as the inevitable fee perfect. And each is his redemption - and me and you and the Donbass and Ukraine. And everyone is given as much as earned and how many survive ..Ukraine stand, and you do not give up. Bite the bullet and bear their redemption. And do, do what you have to! P / S Today noticed a strange coincidence, the English words atonement - ATOnement .. ATO- Anti-Terrorist Operation.

This insanity is reminiscent of what a member of the Church of Satan might say. Even then in June, I noted a ceasefire that Poroshenko had failed to honor (Ukraine: When the Lunatics Run the Asylum).

Even before the ink was dry on the treacherous, perfidious ceasefire document, the so-called "ceasefire" was being violated by the Ukrainians. Several cities were again being bombarded with military hardware, massive troop movements were taking place, Donetsk had fire in the sky, a transport plane delivered armor to Ukraine.

Meanwhile, Ukrainians attempted to capture Pervomaisk, but were repulsed by the NAF.

Aid trucks to Lugansk were forced to turn back at Staniza Luganska because of shelling.

A woman was killed and homes were on fire.

Ukrainian forces sending more troops into Gorlovka of the Donetsk region. At least 32 tanks were also reportedly sent to the area.

Kiev forces' artillery, ammunition, guns and troops being transported by vehicles bearing red crosses on them, is contrary to the Geneva Convention and international law. These vehicles were on their way to south of Donetsk, where they likely will once again start shelling civilian homes.

Avakov conducted a television interview in which he laid bare for all to see the treachery and deceit involved, with the knowing cooperation of highly disreputable figures ready to betray Novorossiya. Following are the highlights of what the psychotic Avakov had to say:

On the subject of the ceasefire, Avakov said right off the following:

"The agreed ceasefire is nothing but a clever cunning on our part in order to achieve what we want, which is to win." To this effect, the ceasefire is but a small tactical measure; the strategic goal is to overthrow 'Putin, the tyrant' and to change the system of Russia itself. This real greater objective and the current war in Ukraine were "planned for years and even for decades." If so, then the personality of Putin is used both as a cover and symbolic shortcut for this decades-old plan."

According to Avakov, in Donetsk and Lugansk, more decisive measures were needed and they were not implemented. As Avakov explicitly put it, the administrative building and the protesters in it should have been destroyed with explosives. Failing to do so was the big "mistake of the oligarchs such as Akhmetov."

In his own words: "Had we destroyed the admin building in Donetsk, 50 people would have died, but we would have saved Donetsk [for junta]"--(at 21:50 of the interview).

It has already repeatedly pointed out, as well, that Poroshenko, Yatsenyuk, Timoshenko and Avakov have never swayed for one moment from their goal: the complete cleansing of the former Southeast Ukraine that broke away, all those refusing the rule of foreign agents. It is a death sentence for one and all to remain, which is why they are constantly and relentlessly bombarding the area with military hardware.

Any and all agreements put forth by these fascist leaders always includes the surrender of the freedom fighters. Included here are the 12 points of this so-called ceasefire, which is nothing short of a total surrender of Novorossiya by traitorous leaders of the same:

on the results of consultations of the Trilateral Contact Group
with respect to the joint steps aimed at
the implementation of the Peace Plan
of the President of Ukraine, P. Poroshenko,
and the initiatives of the President of Russia, V. Putin

Upon consideration and discussion of the proposals put forward by the participants of the consultations in Minsk on September 1, 2014, the Trilateral Contact Group, consisting of the representatives of Ukraine, the Russian Federation and the Organization for Security and Co-operation in Europe [OSCE], reached an understanding with respect to the need to implement the following steps:

Ambassador of the Russian Federation in Ukraine, M.Y. Zurabov (signed)

The signers of this document could not possibly have not known what they were signing. Pay attention in particular to item 6 which prevents the prosecution of the junta and its agents for war crimes and item 10 which is in fact a total surrender of the NAF forces. The signers of this document are traitors. We see now why Commander Strelkov was removed, along with other patriots of Novorossiya.

Author`s name Lisa Karpova
*
15:58
Merkel's remarks about Minsk Agreements were 'petty and disgusting' – Lukashenko
15:02
Viktor Bout says he did not come across Russophobia in US prisons
12:02
Massive fire burns OBI hypermarket at Mega Khimki Shopping Mall to the ground
16:48
US basketball player Brittney Griner exchanged for Russian entrepreneur Viktor Bout
16:31
Zelensky believes Ukraine conflict may end in 2023
20:46
The West is expecting, but not pressing Russia-Ukraine talks
18:27
Putin: The threat of the nuclear war is rising, why deny it
17:17
Ukraine modenises Soviet Tu-141 Strizh drones
15:24
Ukrainian combat drones capable of flying at speed of sound may strike Siberia
14:35
Russian Army continues successful offensive in Krasny Lyman direction
Polish writer shocked to find out Russians will not rise to topple Putin