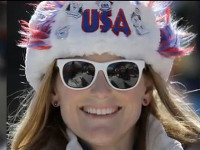 Russia and the United States, and more so our governments, have so many differences that we often find ourselves in conflict with one another. Our countries have very different histories...and even different versions of history. We also have different views of the way the world is now, as well as the way it should be. Our cultural norms can be quite different, as can the way that we see each other. But one of the amazing things is that for all of our differences, Russians and Americans might have far more in common than they realize.

Firstly, both countries are large, powerful, and proud of their history and traditions. Many in the world even call our countries and our citizens arrogant. There's no doubt that Russian history is much longer and deeper than American history. From Ivan the Great to Peter the Great to the Soviet Empire, Russians have so much that they're proud of. American history might be much shorter, but in some ways, that makes what America has accomplished that much more impressive. However they achieved it, rising from British colony to a world superpower in less than 200 years should be universally recognized as an extraordinary accomplishment. And American entrepreneurship and work ethic are two of the traits that helped America achieve so much so quickly. Surely Americans should be able to understand why Russians are so proud of their history and their country, just like we are. Our rich histories and large territories and militaries have caused both peoples to be globally recognized as sometimes even overly confident.

Certainly America and Russia aren't the only countries in the world that are filled with nationalism. However, there are other traits that Americans and Russians share, including our reputations for being hyperaggressive. In some ways, it shouldn't be that surprising that our countries frequently butt heads. Governments are in many ways a reflection on their people...and people all over the world frequently name both Americans and Russians as some of the most aggressive people on the planet. Americans and Russians are both taught from a young age to not back down from bullies, and being a bully is probably seen as less of a negative than being a coward. One thing I have learned in life is that when two stubborn, hyperaggressive people come into conflict, sparks will fly and almost anything is possible. This isn't just on the battlefield. In both countries, bar fights both in the pubs and outside on the streets are not that uncommon at all.

Which leads me to one final characteristic that Americans and Russians both share: a love of alcohol. Drinking is socially a very big part of both cultures. Russians are particularly notorious for their love of vodka (my drink of choice, as well), while Americans probably prefer whiskey, beer, wine, and a variety of alcoholic beverages. Regardless of what we specifically might prefer to drink, drinking (including binge drinking) is common in both countries, particularly compared with other areas of the world.

I know that our countries have a lot of differences and disagreements. And I admit that Russia has a right to be concerned about NATO's eastward expansion. And I know that our politicians continue to play us against one another and try to convince us that we really hate each other. But I promise you that we're actually more similar than they say or than we think. It's too bad we're separated by a hue ocean and we can't all sit around and have a few shots of vodka and maybe a couple of shots of whiskey together. Assuming that we didn't get into a huge bar brawl with each other, I think we'd learn that we actually have a lot more in common than we ever realized.

Doug Pancoast, a former financial planning professional, holds two master's degrees, including an MBA from W.P. Carey's highly ranked business school. Having lived in eight cities across the U.S. (plus two cities in other countries) and having had lots of exposure to people of all different races, religions, and political beliefs, Doug truly brings a unique perspective to anything he writes. In addition to beginning his second book, Doug is currently is in the process of opening his own business in China.