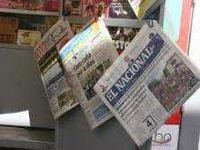 I will start off with two stories, each one with a hilarious ending. I was once dining with friends in the house of a bachelor who was always boasting about how "macho" he was, when in trotted his dog from the bedroom with a pair of ladies' panties in its mouth, with no visible sign of any female around. The gentleman's face said it all and so shocked was he that he couldn't invent a simple excuse, such as "one of the girls left them behind". His gaping, open-mouthed, red-faced squirming embarrassment had everyone looking sideways, raising eyebrows and making signals to each other.

The second story happened to a friend of mine in Madrid. Invited back home for a romantic dinner, informed there was no husband or boyfriend, he was just getting down to some post-paella nookie in the lady's bedroom, when they were interrupted by the turning of keys in the front door. "Hubby" had cancelled his business trip. As hubby entered the bedroom, friend dived into the wardrobe where he stood all night stiff as a statue with only his wristwatch for company. Until precisely 06.55. when the alarm went off ; hubby awoke, opened the wardrobe door and there inside stood my friend, frantically trying to turn it off.

As hubby started to ask what the Hell he was doing in his wardrobe, my friend shouted out "Buenos dias!" pushed hubby back on the bed and sprinted out into the corridor, where he found the keys in the front door and found himself with just enough time to open the door, take the keys out and deftly lock it from the outside, whereupon he took off through central Madrid stark naked with hubby bawling obscenities at him from the bedroom window, the most hilarious of which was "cabrón!"

The dishonesty in both cases came back full swing to strike those who made false claims in the face. In the first case, the gentleman who had a penchant for cross-dressing had his privacy invaded by his hound; in the second, the unladylike slut who invited a stranger into her own bed got her come-uppance. So to speak. In both cases the secrets were valid until they were broken.

For those who say "served him/her right" in either or both cases, then surely state secrets by the same measure are open to the scrutiny of those who challenge wrong-doing where this violates fundamental law. While one may sympathize with the right of the gentleman in the first story to do whatever he pleased behind closed doors and may feel for him in his utter embarrassment in front of his friends, everyone would agree that the lady in the second story deserved all she got (in the event, the husband divorced her and she lost a tremendous amount in material terms).

So by the same token, if national security services are violating fundamental law, breaching Constitutions and infringing human rights as they go about their work, should the secret not get out as to what they have been doing and how they have been behaving? Especially so in the cases of nations which always take the high moral ground, deride others as being pariahs or "dictators", of violating human rights, yadder yadder yadder. So all that Cold War rhetoric was total bullshit, we see.

If the United States of America is holding prisoners in concentration and torture camps, I want to know about it and so does everyone else. So I take off my hat to Bradley Manning, Julian Assange and Edward Snowden because these men have "cujones" and in the name of what they perceive to be a moral battle, to do what is right and expose what is clearly wrong, if not denounce what is downright illegal, they place their own lives at risk and possibly jeopardize any sense of a normal life for the rest of their days here on Earth.

I receive messages of support from many readers thanking me for my courage in writing about sensitive issues. However, beside these three men, and others, what I have done pales into insignificance as I make vague allegations to "alleged" actions, protecting me from the international law-court and saving my own bacon, while Manning, Assange and Snowden are out there providing the material for vultures like me to use.

Cujones! THEY are the heroes and humanity must protect them from the monsters they have revealed and whose secrets they have laid bare to defend international law and human rights. And that they are the defendants and victims speaks volumes about the world we live in.