Let everyone reporting on the situation in Syria agree upon one thing: the situation is hideous, it is unacceptable, it is disgusting, it is a disgrace to humankind, it is an insult to our collective intelligence at the turn of the century and...video evidence that Obama is totally wrong. The ones preparing to use chemicals are the terrorists. 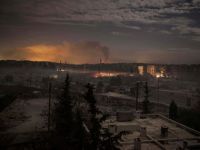 We may begin by discounting ninety-five per cent of what we read in the crispy-clean reports from the corporate media - you know, that pile of bullshit pressed and ironed on your morning newspaper on your breakfast table in Europe or slung into a pile of dog doos in your driveway by some immigrant trying to find the Great American Dream in the US of A. And let me explain why.

Remember the stories about Saddam Hussein's Weapons of Mass Destruction? Remember when the President of the United States called him a liar, when he said he didn't have any? Well now, who was lying and who was telling the truth? The answer to the question is that His Excellency President Saddam Hussein al-Tikriti was telling the truth and the one lying through his teeth was the President of the United States of America. The ones who, in the words of Bush, "stiffed the world" were himself and his wonderful Secretary of State, Colin Powell, with his wonderful foreign intelligence (a British bullshit report copied and pasted from the Net and sexed up by the British Prime Minister, Tony Blair).

Remember the stories about Iraq trying to obtain yellowcake uranium from, to quote the British Intel source at the time, "Nigeria" when the country exporting this was in fact Niger, and when the entire "story" was found out to be another barefaced lie by the then Director of the International Atomic Energy Agency, Mohammed el-Baradei? Remember, more recently, the nonsense about Muammar al-Qadhafi's air force strafing civilians, and then when Saif al-Islam al-Qadhafi took SKY News around to film the sites they themselves had reported bombed, they had to admit there was no substance whatsoever to it?

Remember the man they paraded on TV as "Saddam Hussein", when his teeth were 100 per cent different from the dental records of the President of Iraq? Remember the bushes in flower behind him as he was "captured" at a time when those bushes are not in flower in that part of Iraq?

So there really isn't much sense in believing a word the same liars say, is there? You know, the ones who at the start of the Georgian conflict were showing rockets fired northwards from Georgia into Russia, saying they were Russian rockets firing southwards into Georgia, when everyone knows that the west was behind Mikhail Saakashvili's attempt to seize South Ossetia and Abkhazia and humiliate Russia, a type of cherry in the cake to the Bush-Cheney regime as they waltzed out of office. In the end, they crawled out of office on their knees snivelling like cowards in total humiliation and abject defeat, together with that insult to the Founding Fathers, Condoleezza Rice.

As for Syria, President Obama is doing his fair share of sabre-rattling now that he has been voted back into office, warning the Syrian government against using chemical weapons. Who was thinking about using chemical weapons? What about that ploy a few months back to smuggle chemical weapons out of Libya, into Turkey, stage a false flag event and blame Syria, justifying an invasion? Yes, the one outed here in this column.

The ones planning to seize weapons and use them against civilians, blaming the Syrian government, are the western-backed terrorists, or are they rebels? An activist is a terrorist who uses western weapons; a terrorist is an activist who does not.

So let's call them terrorists. The same ones who on December 4 strafed a school murdering or injuring up to nineteen students and a teacher, then blamed the Government. What Government strafes its own schools and civilians when it is called upon to protect them, what government which has lost thousands of security force personnel to terrorists turns against its people?

Certainly not the Syrian government which is far more popular than the scourge the west calls "the Opposition". After Libya, let us keep an open mind and let us entertain the notion that this entire spectacle is a western show for strategic and geo-political ends, namely to push Russia out of the Mediterranean, to create a stepping stone towards Iran, the big fish, to remove a stone in Israel's boot as it decides to create a greater Israel, raising the middle finger to the few western politicians who still have a grain of decency, guts and humanity in them and who pursue what is called an ethical foreign policy.

And let there be no doubts at all as to which are the last stations on the railway line of corporate greed pandering to the energy lobbies which control NATO and which have hijacked western countries' foreign policies, against their Constitutional law. But hey! Let's not worry about trivia... 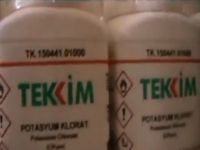 And how about this for evidence that the ones planning to use chemical weaponry are, as stated, the western-backed terrorists?

No doubt this evidence will soon be zapped from the air, but then again, that makes it all the more plausible, does it not?