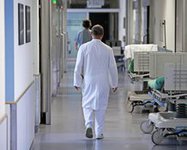 If there is one universal question that haunts all human beings at some point in their lives, it is, "Why do we die?"

Death, after all, is the great illogic.  It ultimately claims all, the rich and the poor, the mighty and the small, the good and the evil.  Death also has the capability to make most human pursuits-such as the quest for wealth, fame and power-vacuous and fleeting.

Given this reality, I have often wondered why so many people are still willing to exploit, and even destroy, the lives of others during such pursuits, especially when most of the world's major religions seem to agree that the way one treats others in life has a major impact on how one will be received after death.

I have also wondered if the world would be a better place if people were more cognizant of their own mortality.  Would there be less hatred, war, economic inequality, exploitation, greed, deceit, hypocrisy and injustice if people realized that all the material trinkets and power they've acquired through these methods will ultimately not gain them even one more second of time?

I doubt it.  Death, after all, by its very mystery, does not invite this cognizance.  It is, as Hamlet said, an "undiscovered country" that defies the physical senses.  Perhaps this is why the corporate-controlled media inundate the world with images of material wealth, fame and power, and why the world values them above all else-they can be seen and felt.

Not so with the mysteries of death.  There is no proven certainty that foregoing life's luxuries or ignoring life's temptations will result in an eternity of happiness or that corruptly acquiring such luxuries or succumbing to such temptations will result in an eternity of pain.  So we struggle with the question of whether the visible and tangible rewards of the physical world should trump an invisible and intangible afterlife that may not even exist.

A second dilemma is that nature, while beautiful in many respects, actually thrives on death.  Everyday countless weaker animals are killed to provide food for stronger predators.  And, as Mr. Spock once said in the classic television show Star Trek, "In the strict scientific sense we all feed on death - even vegetarians."

And when one adds to that equation the fact that people also feed on death for other reasons-clothing, shelter, torturous experimentation on animals, war, political gain and profit-suddenly nature becomes something that is not celebrated and revered, but plundered and destroyed, and human beings become "resources" whose value is measured by their labor and their consumerism.

But sometimes one solitary life reminds us that there are values that exceed materialism, that unconditional love does exist, and that altruism can come from the most extraordinary of places.

A few years ago, I wrote One Solitary Life (Pravda.Ru, January 17, 2008) after my dog Maggie died.  A few days ago, Dominick, another dog I had for several years, also passed away.

Dominick was a mixed breed dog whose value in terms of dollars and cents was negligible.  But in terms of the joy and love he gave to my family, he, like Maggie, was priceless.

The illness that took him came rapidly.  Yet even in his final minutes, he continued to lick my hand, and the look in his eyes told me he was more concerned about me, the one who would go on living, than he was about himself, whose life was about to end.

I am sure that anybody who has lost a pet can understand the void it leaves.  There is nobody to happily greet you at the door when you arrive home, nobody whose loyalty is unquestioning, and nobody who loves you without regard for your wealth, possessions or social status.

I realize that some readers will question why anybody would spend time composing an article about the passing of a dog-chattel in the eyes of American law-when human beings die tragically every day.

But that is precisely the point.  Perhaps if people can see the noneconomic values and virtues that animals possess, they might be more capable of seeing the noneconomic values and virtues that their fellow humans possess.  And if people can come to realize that many species of animals experience similar emotions, desire for companionship, and pleasures and pains that humans feel, they can better understand that the world, and everything in it, is meant to be shared.

Nature can be cruel, and death, with all its mysteries and sorrows, is an inevitable part of life.  Maybe the problem is we want to ignore this inevitability until it is too late, and then, even when we have no choice but to accept it, we still refuse to learn from it.

So I close by reiterating what I said in my first One Solitary Life article:  "Nobody will ever convince me that my departed animal companion, whose loyalty and unconditional love gave us so much happiness over the years, did not possess a soul.  In fact, the world would be a better place if more human beings possessed a soul like his."