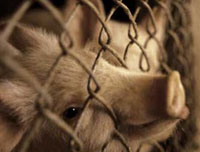 Although their position at the top of the food chain has caused most humans to become omnivores, this dominant position has also compelled them to exploit plants and animals not simply for food, but for other purposes as well. Trees are cut down to make wood and paper products, while animals are killed for their fur or their skins, and subjected to painful and debilitating experiments allegedly designed to ensure that new products and/or medicines are “safe” for human use. Even many companion animals, so adored for their devotion and unconditional love, are bred in “puppy mills,” where pregnant dogs and their offspring are often kept in crowded and filthy cages.

On the basest level, animals are often destroyed for nothing more than entertainment; the childhoods of serial killers are frequently peppered with incidents of cruelty to animals; a once popular NFL quarterback organized and bet upon dog fights, often destroying the “losers” in painful and brutal ways; roosters are often subjected to the same type of “pit fighting” as dogs; bulls are often slowly and painfully stabbed to death in front of thousands of cheering spectators; and hunting is now a “sport” that has become the catalyst for a plethora of cable television programs showcasing so-called sportsmen “high-fiving” each other over the carcasses of dead animals.

Of course there are many who will argue, with some merit, that despite laws like the Humane Slaughter Act, animals are killed more humanely by hunters than in many slaughter houses; therefore nobody opposed to the killing of animals for “sport” can claim the moral high ground if beef, pork or poultry are part of their diet.

While I agree that people who engage in the “sport” of hunting should not be stereotyped, nor their motives lumped into a single category, it is evident, at least in some cases, that hunting is sometimes nothing more than a way for sadistic cowards to satiate their bloodlust without having to face any real danger.

Country singer Toby Keith, for example, is an avid hunter; so is “rocker” Ted Nugent, who, not surprisingly, often appears on the concert stage with Keith; Dick Cheney, the corruptly appointed “vice-president” of the United States, often engages in canned hunts, where the quarry has no chance of escape; Antonin Scalia, the racist, arrogant and unethical Supreme Court “justice” largely responsible for Cheney’s and George W. Bush’s illegal occupation of the White House, frequently joins Cheney on his hunting excursions.

But what else do these “sportsmen” have in common?: Toby Keith sings about “American Soldiers” and kicking “ass” in Iraq, yet has never served in the military. The closest he has come is when he “entertains,” or perhaps more accurately exploits, American troops in Iraq, since such “entertainment” is also an effective way to ingratiate himself to country music’s fanbase; Ted Nugent avoided serving in Vietnam by feigning insanity. Yet, now that his age and the demise of the military draft have insulated him from involuntary military service, he has become an outspoken war hawk; Dick Cheney, as I have mentioned in several previous Pravda.Ru articles, received five deferments to avoid serving in Vietnam, then tried to justify his actions by claiming he had “other priorities.” Yet this coward was one of the principal promoters of the illegal invasion of Iraq; and Antonin Scalia, Cheney’s ethically deficient “hunting buddy,” also avoided serving in Vietnam. Apparently in the vernacular of these so-called sportsmen, “courage” is defined as killing defenseless creatures who lack the capability to shoot back.

Plants and animals are defined in many cultures, particularly in capitalistic ones, not as living, sentient beings, but as “resources.” Therefore is it any surprise that most major corporations have “human resource” departments?

Unfortunately, when the usefulness of a resource is exhausted, it is usually unceremoniously disposed of, even when the resource still lives and breathes. Companion animals are often “put to sleep” when they’ve outlived their “usefulness” to their owners, while human beings are “laid off” and forced into unemployment lines.

Companion animals, however, are also “put to sleep” to end their pain and suffering. In fact my desire to write this article resulted from the unfortunate loss of a companion animal whose company I had enjoyed for several years.

The decision to put my longtime friend to sleep was not an easy one. As we looked into the eyes that once sparkled with life, and saw staring back at us a sad mixture of pain, confusion and resignation, I thought how unfair it was that she was incapable of telling us how she really felt. She couldn’t say, “I’ve had a good life, but now it’s time to go,” or “Give me an aspirin and I’ll be better in the morning.”

Then I thought how ironic it is that human beings, who are capable of communicating their medical conditions, cannot, because of an alleged respect for the “sanctity of life,” choose the option of being “put to sleep.” In fact, Dr. Jack Kevorkian went to prison in Michigan for helping patients end their lives in such a manner.

Yet how hypocritical this “sanctity of life” argument really is. As humans we are benevolent enough to end the pain and suffering of creatures who cannot speak for themselves, yet are more than willing to prolong the pain and suffering of our fellow human beings, often attaching them to myriads of tubes and machines that can keep them alive, but never return them to life.

What is the motive behind prolonging human suffering? It is the answer one will always find in a capitalist economy: MONEY. The departed (aside from funeral expenses) cannot consume goods or services. But keeping one alive with a plethora of machines and tubes can produce a healthy profit.

But where was this alleged concern about the “sanctity of life” when in Michigan, the same state where Kevorkian was imprisoned, inmates died from lack of adequate medical care, and judges, as in the Maurice Carter case, joked about prisoners’ medical conditions? Where is the outrage when rape and other nonconsensual sexual activity in America’s prisons result in the transmission of the HIV virus, turning any prison term into a death sentence? Apparently if Kevorkian wanted to help his patients commit suicide without risking jail, he could simply have had them incarcerated.

And has anybody, other than myself, ever noticed that this alleged respect for the “sanctity of life,” only seems to occur at or near birth (hence the debate over abortion), at the time of permanent disability, or near the time of death? Absent these periods, the respect for life’s “sanctity” mysteriously disappears. Outsourcing of jobs to third-world countries, where labor can be abused and exploited, and increasing reliance on temporary and part-time employees in the United States have left millions without health insurance, and many struggle with pain everyday because they cannot afford to go to a doctor. Patients with heart conditions are often told to “avoid stress,” then badgered into heart attacks when they are unable to pay their medical bills.

Even when medical advances, such as stem-cell research, could actually produce cures that would not only end pain and suffering, but prolong life, they are opposed because of this alleged respect for the “sanctity of life.” The primary advocate of this “sanctity” is George W. Bush—the same George W. Bush who cared so little about the risk of executing the innocent that he routinely denied DNA tests to death-row inmates, which could have potentially exonerated them—the same George W. Bush who lied without compunction while a majority of Americans applauded and cheered as young men and women were sent off to die in Iraq.

It has been said that animals have no rights. Truth be told, humans have no rights either, except what the power structure chooses to give them. And, as demonstrated by laws like the Patriot Act and the illegal spying conducted by the Bush dictatorship, these rights can be erased at any moment.

Still, humans have a voice to demand their rights. Animals, however, have to rely on humans to speak for them, and these are often the same humans who abuse, mistreat and slaughter them.

It has also been said that animals have no souls. This statement has often been used to rationalize the argument that animals are not deserving of the same respect as humans. Yet it seems disingenuously arrogant for humans to proclaim that creatures created by God cannot return to God.

And nobody will ever convince me that my departed animal companion, whose loyalty and unconditional love gave us so much happiness over the years, did not possess a soul. In fact, the world would be a better place if more human beings possessed a soul like hers.