On random, unprovoked violence and the need to dismantle NATO 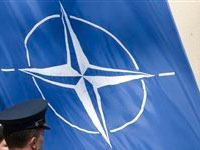 Recently, as I was bicycling to work, I became the victim of random, unprovoked violence as I was hit by a nearly full bottle of flavored water thrown by a passenger from a car that passed me.  Due to my superior reflexes and conditioning I managed to stabilize my bike (and myself rom the initial shock) as the bottle bounced off of me.  Nevertheless, why someone would waste a perfectly good, chilled bottle of sugared drink on a 40 degree Celsius day trying to injure someone they didn't even know was very perplexing to me.

On another occasion, two speeding vans passed me on my bike and then deliberately drove halfway on the dirt/gravel shoulder deliberately picking up dust for a good period of time obviously expecting me to bicycle through the morass of irritating inhalants they had generated.  Fortunately, however, the wind picked up in a direction perpendicular to my travel clearing my path.  Again, why someone would deliberately damage their tires and axles trying to make life unpleasant for someone they don't even know was very strange and has deep roots in the capability that some human beings have to inflict random evil upon one another.

Indeed, one can define this form of evil as the ability of some depraved, amoral individuals with no conscience to hurt others for no reason except that they can "get away with it" and because it demonstrates the "power" that they think they exert over others as big bullies typically do.  Of course, we see many such examples of this on a far more horrific scale every day within our societies such as in Columbine High School, Colorado, in the World Trade Center collapse on 9/11/01, the Madrid train bombings in 2004, and most recently in Norway when some 69 teenagers were slaughtered by a deluded madman.

But on a far deeper level, we are also witnessing situations where entire societies (led by evil people) inflict unprovoked and horrible evil upon other societies such as what Nazi Germany did to Russia and Serbia during WWII.  Today, little has changed as NATO, an organization with a combined population of some 700 million went to war against Serbia, a tiny but historically-significant nation with a mere 10 million souls in 1999 and is still at war with this fledgling democracy today.

Despite the fact that NATO was originally chartered to be a "defensive" military alliance to counter the Soviet threat, a new bogeyman-like "threat" had to be concocted when the Soviet Union collapsed and the Berlin Wall was torn down to maintain the façade of NATO's "usefulness" despite the waning Soviet threat.  Though Yugoslavia was never a member of NATO and Yugoslavia had never threatened any Western European countries, this minor detail was not reason enough to prevent NATO, led by the US and Germany, from illegally invading Serbia in 1999, choosing sides in a nasty but highly-contained civil war, slaughtering roughly as many innocent civilians as perished on both sides of the conflict, and destroying international law in the process via an unprovoked attack.

Though Serbia was one of the staunchest allies of the US and other allied nations during both WWI and WWII, this was no matter to policymakers in the State Department and elsewhere as nations are supposed to behave based on their perceived national interests (and the "elites" function based on "global" or supranational interests) and not on "naiive" historical "friendship" or past alliances.  History is written and rewritten by the victors (as we are seeing in today's era where black is white and white is black in the mainstream corporate-controlled media) and lies (about the Serbs) told one thousand times over and over again (ad nauseum) become the accepted "truth."

The fact that the Serbs saved over 600 allied pilots (including 500 American pilots) who were shot down by the Nazis over Yugoslavia and ultimately sheltered by Serbs at great cost and ultimately rescued in Operation "Halyard" was of no consequence to today's "strategic" planners in Washington and elsewhere and must be censored at all cost.  Neither was it of any consequence that the enemies of the Serbs all slaughtered Americans in terrorist actions both in America and abroad (most recently American military personnel were slaughtered by a Kosovo Albanian in Frankfurt).

The Serbs couldn't even kill American prisoners of war who invaded and bombed their nation (thank God!).  But no, NATO, led by the US and Germany, chose to persecute the Serbs because of their Orthodox Christian and Slavic heritage as a test balloon for Orthodox Christian Russia and as a warning to other weaker nations that dare defy the "New" World Order where only might makes right.  The Serbs stood up to Nazi Germany some 70 years ago and had to be taught a lesson and put down so they will never resist fascism again.  Individuals such as Madeleine Albright, whose family sought refuge as Jews in Belgrade must have had sudden amnesia about this when she is reported to have declared (when supporting the illegal bombing of the Serbs): "What is the point of having the strongest military in the world, if we can never use it?"

And now, today, the world is no more a safer place but far more dangerous with the Islamic terrorist safe haven of Kosovo -  illegally stolen from Serbia.  Over 130 Serbian Orthodox Christian Churches and Monasteries have been systematically razed by Kosovo Albanian extremists, hundreds if not thousands of non-Albanians (Serbs, Gypsies, and others) have been kidnapped and are feared dead (many of their organs barbarically harvested to garner terrorist funding on the open market), and the remaining persecuted Kosovo Serbs are ghettoized North of the Ibar river as NATO prepares the "final solution" for them and thus make Kosovo ethnically and religiously "pure" - devoid of Serbs.  Not even the Austrians, Nazis and Ottoman Turks could accomplish this feat.

America has suffered and continues to suffer much "blowback" as a result of these pro-Islamic extremist and blatantly illegal policies but Americans are largely unaware of why because of the lies and censorship perpetrated in the corporate-controlled mainstream media and because many of their leaders do not serve the people who elected them but serve more sinister globalist and "elite" interests.

Evil will ultimately take care of itself but not after great suffering is wrought on humanity.  As we all daily ask ourselves why gangs of youths murder and rape elderly women, why derelicts throw rocks from freeway overpasses, why kids slaughter fellow classmates, why fathers murder their wives and children, and why a group of well-organized terrorists would slaughter 3000 innocent Americans (including an acquaintance of mine) on a beautiful, late summer morning in New York City, we must first ponder the nature of how our societies are descending into the chaos of the jungle - the heart of darkness - where might makes right.

This is where evil has no bounds or restraint, cannot be compromised with, and will consume all of humanity in an all encompassing fire from which there will be no escape.  Though many of our leaders lack the courage and confidence of character to admit that they made a mistake, we made a grave error by mistreating Serbia and this will haunt the West for many decades to come.   Just as the invasion, theft, and rape of Czechoslovakia by Nazi Germany in 1938 further enabled and emboldened this unprecedently-evil regime to further its dreams of "lebensraum," (also on false pretexts of "atrocities" against the Sudeten minority) so are we enabling further evil to spread via NATO's illegal actions in Libya and beyond as a highly organized group of fanatical "elites" seeks to control the world using NATO as their tool of tyranny.

NATO must be dismantled - it has outlived its usefulness.  Far from protecting freedoms and spreading democracy, it has become an instrument of big bullies to inflict terror on the weak.   It is my sincere hope that NATO's recent brutal actions against Kosovo's remaining Serbs will open the eyes of the international community toward man's inhumanity toward man and act to stop this barbaric violence against unarmed civilians.