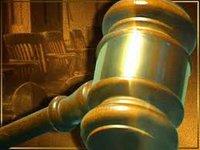 The calming effect of oil was known to the ancients. The use of oil on troubled waters was discussed by Aristotle and Pliny. In 1762, Benjamin Franklin did an experiment, which he reported in A Letter to William Brownrigg, in 1773:

"I then went to the windward side where they (the waves) began to form; and there the oil, though not more than a teaspoonful, produced an instant calm over a space several yards square which spread amazingly and extended itself gradually till it reached the lee side, making all that quarter of the pond, perhaps half an acre, as smooth as a looking glass."

Something as dramatic as citizens themselves deciding to take action by forming Grand Juries to indict a President is certain to stir up emotions on both sides of the issue. My goal in this essay is to replace impulsive emotions with facts and reason.

Let me start with the dangers that emotions can present as a component to solving problems.

Every thought we think changes the activity of specific chemicals in the brain called neuropeptides. What we are thinking about determines what our emotions are.

Conversely, creative, poetic, descriptive, and interpersonal thinking produces many emotions. People like actors, writers, musicians, and artists frequently have enough emotions for a family of four all by themselves.

Emotions cloud our thinking, cause us to be impulsive, and alienate others. Problem solving is better served by reason than by feelings.

So let's begin with all of those irrational fear mongers who are trying to discourage people from participating in a Grand Jury. From them, we are hearing things like: "People can't go around just starting their own ‘pretend' Grand Juries. That has got to be against the law. You'll get arrested. You will go to jail for falsifying a court document and impersonating a court official. You have no right to do such a thing!"

Compare such scare tactics aimed at frightening citizens to this clearly stated, rational wording in the Handbook of Texas:

"The grand jury's investigation of any matter may be initiated by the court, the district attorney, its own members, or any credible person. The grand jury may summon witnesses by subpoena and examine them under oath. On completion of an investigation the grand jury determines by vote whether or not an indictment should be presented to the court; nine votes are necessary for a decision to indict, and nine members also constitute a quorum."

I have also heard anti-grand Jury people making emotionally driven arguments like: "Ordinary people can't just go around making decisions in Grand Juries without being supervised by a lawyer. The whole justice system will fall apart if lawyers aren't supervising Grand Juries. Who knows what horrible injustices they will commit without a lawyer to guide them?"

In many states governmental lawyers are NOT welcome in Grand Jury sessions; they are actually banned by law from any participation in Grand Jury sessions. Take Virginia, for example. The mere presence of a lawyer representing the government will invalidate any decision of a Grand Jury. Without the dramatic rhetoric, see how the State of Virginia explains the Grand Jury's relationship to any such attorneys.

"To keep the Grand Jury free from any pressure from the State, Virginia makes it illegal for any attorney representing the State to appear before the Grand Jury, except as a witness. If, however, members of the Grand Jury have questions about their duties, they may ask the Commonwealth's Attorney for advice.

Although the laws may vary from state to state, Grand Juries are viewed the way United States Supreme Court Justice Antonin Scalia sees them,

"In fact, the whole theory of its function is that it belongs to no branch of the institutional Government, serving as a kind of buffer or referee between the Government and the people."

"Rooted in long centuries of Anglo-American history, Hannah v. Larche, 363 US 420, 490 (1960) with J. Frankfurter concurring in result, the Grand Jury is mentioned in the Bill of Rights, but not in the body of the Constitution. It has not been textually assigned, therefore, to any of the three branches described in the first three Articles. It is a constitutional fixture in its own right."

So my first teaspoon of rational oil is to still the waters roiled by those who intentionally promulgate unfounded rumors. They are so threatened by the constitutional power of the Grand Jury that they irresponsibly spread their reckless gossip in an attempt to frighten citizens away from exercising their legitimate constitutional rights.

My second teaspoon of rational oil is to be used to still all the angry anti-AKA Obama citizens who use more rhetoric than reason to express themselves.

There are not going to be any lynch parties for politicians. As much as we might mention ‘torches and pitchforks,' the only revolution I support and the only revolutions supported by the leadership of the Grand Jury movement is a revolution as defined by the U. S. Constitution. Our forefathers had the wisdom to provide a way for citizens to redress their grievances in a peaceful way.

If you personally have any other intentions, please remove yourself from my email list and do not post on this blog. If you express irresponsible rhetoric that even hints of any action that is not covered by your constitutional rights, please disassociate yourself from the Grand Jury movement. Such attitudes are more of a liability than an asset to the cause.

We welcome and appreciate patriots who are committed to the principles of Constitutional Government.

A little reminder from some old friends of mine:

Now read this. Sit back, relax and enjoy. It is over 6,000 hopeful words
AKA Obama Fans: All together now - say OMG!!

Rev. Sewell is a member of Mensa, a U.S. Navy Veteran, and a Member of the Association For Intelligence Officers. He is an International Commentator and a member of the Society of Professional Journalists, a frequent commentator on religious and political issues. His articles are published by "Pravda",  "Intellectual Conservative", "American Thinker" and various periodicals. His award winning research on Family issues is published in several languages.