AKA Obama fans: All together now – say OMG!!

It isn't hard to imagine the gnawing anxiety that AKA OBAMA lives with, day in and day out. Much has been written about AKA OBAMA's behavior that reminds mental health experts and others of NPD (Narcissistic Personality Disorder.) A frequent manifestation of such a disorder is The Narcissist, as Liar and Con-man. 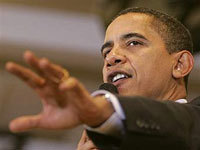 This disorder is frequently misunderstood as "self-love." A more accurate understanding is love of a reflection of one's self. Abused, abandoned and neglected children will compensate for damaged egos by creating an ideal reflection of themselves that they then embellish and vigorously defend. A person with NPD is quite capable of a mind twisting position like, "I have nothing to hide, but I am hiding things anyway." AKA OBAMA certainly fits the model of having such a childhood. While I am not in the position to deliver an official In Absentia diagnosis of a full strength NPD case, many of the indicators are present.

If AKA OBAMA were not in a position of public trust, most of us would probably overlook such deception and secrecy. For those of us who care about our Constitution and the rule of law, the issue becomes clear in this article that appeared in on-line Pravda by international columnist Mark S. McGrew, The Mysterious Shadow: Code Name Obama. Most Americans do not want their president to be secretive about his past. However, if one is living a lie to preserve the ego compensating, idealized reflection of self, one will go to great lengths to hide things that most would routinely reveal.

For the person who has NPD tendencies, the lies used to create the reflection become so numerous that eventually the man in the mirror cracks, and so does the real human being hiding behind the reflection.

A useful tool in evaluating things that are not known with certainty is Occam's razor. When multiple competing hypotheses are equal in other respects, the principle recommends selecting the hypothesis that introduces the fewest assumptions and postulates the fewest entities. It is in this sense that Occam's razor is usually understood. I condense this to the simple question: what is most likely? In our discussion of the documents which AKA has hidden, most of this article is an examination of which explanation is most likely.

What we know with certainty is that AKA OBAMA is not practicing the virtue of full disclosure. " The biggest question, and the biggest reason for asking more questions, is the fact Obama has enlisted law firms across the nation to battle every attempt to access, among other documents, his birth, schooling, immigration or passport records." New Jersey attorney Mario Apuzzo

There are so many potential sources that can end AKA OBAMA's Presidency that it is impossible to keep them all quiet. It's just a matter of time. As columnist Davvy Kidd says, IMPOSTOR PRESIDENT OBAMA: VICTORY WILL BE SHORT LIVED. First, let's think of all the lawyers and support staff involved in keeping the birth certificate issue quiet. Isn't it likely that some of them know what they are hiding? Isn't it likely that several people at the Hawaiian Department of Public Health know what is, or is not, on the original birth certificate that AKA OBAMA refuses to release? Did you know that there is a one million dollar reward offered for AKA OBAMA's Hawaiian birth certificate?

2. Please get this straight:

Hawaiian officials have not validated AKA OBAMA's place of birth. What they have said is that they "have the original document" on file. They haven't offered a clue as to what information is in that document nor have they said what kind of birth certificate is on file; a conventional birth certificate issued by a hospital with a doctor's signature or the kind of birth certificate issued by Hawaii on the basis of an affidavit? The Hawaiian officials are not part of a cover-up. They can not legally validate what is on that document without a court order or permission from "our" Chicago con-man. Recently a Hawaiian government official stepped over the legal line and overtly stated that AKA Obama's "vital records" showed that he was born in Hawaii. It is entirely possible for the "vital records" of Hawaii to show than a person was born in Hawaii when in fact that person could have been born elsewhere.

Laws of the Territory of Hawaii ACT 96 To Provide For The Issuance Of Certificates Of Hawaiian Birth was in effect from 1911 until 1972 and allowed someone who was born outside the Hawaiian Islands to be registered as though he were born in Hawaii. Under that law, someone simply would have presented herself to the Hawaiian authorities and declared that the child was born in Hawaii. The person could have sworn under oath and presented witnesses and other evidence. If the authorities accepted it, that was the end of it. All a person had to do was file a false statement and Hawaii took them at their word.

Knowledge of this practice was wide spreadand there are probably thousands of people who obtained Hawaiian birth records between 1911 and 1972 through the process of affidavits and witnesses rather than hospitals and delivery doctors.

The only way to know where AKA OBAMA was actually born is to view AKA OBAMA's original birth certificate on file in Hawaii to see what kind of birth certificate it is, and to examine what corroborating evidence supports what it says about AKA OBAMA's alleged place of birth. If the birth was in a hospital, as AKA OBAMA has maintained, such evidence would be the name of the hospital and the name and signature of the doctor who delivered him.

Here is the information on Hawaiian law that makes it clear why we will never know the truth until we see the actual birth certificate.

The records of hospitals in Hawaii have been searched and there is no record of Stanley Ann Obama ever having given birth to a child. In a November 2004 interview with the Rainbow Newsletter, Maya Soetoro told reporters her half-brother Sen. Barack Obama was born on Aug. 4, 1961, at Queens Medical Center in Honolulu. After it was concluded that Obama and his mother were never there in February 2008, Maya told reporters for the Honolulu Star-Bulletin that Obama was at the Kapiolani Medical Center for Women and Children. Obama and Mom were never there either. AKA Obama has said he was born at Kapiolani Medical Center yet no hospital official has suggested that their facility should be designated as the birth place of a President. Odd!

Which is most likely?

• AKA Obama is hiding a conventional birth certificate issued by a hospital and signed by a doctor?

• AKA Obama is hiding a birth certificate attested to by witnesses with no hospital or doctor mentioned?

3. The birth document published on AKA Obama's web site  isn't  adequate evidence  of place of birth even if it isn't a forgery

The Certification of Live Birth that was published on AKA OBAMA's campaign web site is not a Birth Certificate. It is easy to tell the difference between the two types of documents. It is very likely that the COLB used by AKA OBAMA's campaign is a fraudulent document. Several forensic document examiners have carefully scrutinized the COLB and declared it suspicious or an obvious forgery.

Forensic document examiner Sandra Ramsey Lines, a Former Federal Examiner with a long history of expert testimony in state and federal courts, has testified in an affidavit that states, in part:

Sandra Lines says, "I can state with certainty that the COLB presented on the internet by the various groups, which include the "Daily Kos," the Obama Campaign, "Factcheck.org" and others cannot be relied upon as genuine. Dr. Polarik raises issues concerning the COLB that I can affirm. Software such as Adobe Photoshop can produce complete images or alter images that appear to be genuine; therefore, any image offered on the internet cannot be relied upon as being a copy of the authentic document." Sandra Ramsey Lines summary is posted at U. S. Law Blog.

Who Certified AKA Obama as "Natural Born" at FactCheck?

Joe Miller and Jess Henig, that's who! They are a couple of partisan Obots -- just what you'd expect -- Jess took the photos presented on their webpage and did all of the writing, while Bob basically held the COLB open for Jess to photograph. Those two are completely unqualified to perform any kind of forensic examination of any document, and FactCheck.org knows it -- and so do Henig and Miller.

Here is another thing to consider. Birth Certificates might be protected by privacy laws in Hawaii but transactions for purchase should be available as public record. The COLB that AKA Obama offers as his proof (and has been deemed unreliable) just showed up without explanation. There is nothing from the State of Hawaii about AKA Obama requesting a copy of his BC. Obama, nor the DNC has come forward with evidence of a request for the copy so where did it come from? These cost $10 to get and if requested via the phone someone would have had to use a credit card or sent a check or money order by mail, yet, nothing is, or ever has been, offered as proof of even a request for the copy. Someone could have said here is a CC receipt, or a canceled check, or the remitter's copy of a money order.

Someone should have this without a doubt. Has anyone asked the State of Hawaii if there is a record of payment for a COLB from AKA Obama?

This is something that could even be forged easily but not even a forged receipt or record of payment of any kind has been offered.

Could the reason for this be that Obama's COLB is a forgery and no one even thought to forge a receipt for it from Hawaii?