Libya: Is the West lying again?

Where is the evidence of the air strikes ordered by Colonel Gathafi against his "unarmed" civilians? Is this yet another contrived pretext for the USA and its sycophantic allies in NATO to start an invasion? Why is NATO speaking about enforcing a no-fly zone? Who started the conflict in the first place? Russian officials call the NATO claims a bunch of lies. 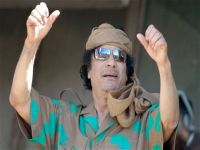 Let us be perfectly honest here. We are not dealing with well-meaning countries whose own history is flawless. We are dealing, in many cases, with former imperialist powers which committed massacres, rode roughshod over peoples and laws and lores and cultures and imposed their own will by invading other territories, drawing lines on maps and "civilising" vast swathes of the world with the Bible and the bullet. What a legacy.

We are dealing with those who launched a savage and illegal attack against Iraq, outside the auspices of the United Nations Organization, we are dealing with those who lied through their teeth that Saddam Hussein was developing nuclear weaponry because he bought yellowcake uranium from Nigeria (when in fact the country producing it is Niger), an accusation refuted categorically by Mohamed El-Baradei of the International Atomic Energy Agency.

We are dealing with those who forged a causus belli based upon lies, fabrications and manipulation, cajoling, bullying and blackmail, those who stated that Saddam's WMD was "in Bagdad and Tikrit and north, south, east and west of there" (Rumsfeld), with those whose officials had received shopping lists from Baghdad's museums already before the invasion, those who deployed military hardware against civilian structures and then doled out billionaire reconstruction contracts - without tender - to White House cronies.

We are dealing with those who committed war crimes in Kosovo, in Afghanistan and in Iraq, all in the last decade, not to mention a myriad of other countries beforehand.

So now the same clique of warmongers, whose foreign offices and military have been involved in wars (for some reason it must be) since time immemorial, accuse Colonel Muammar Gathafi of war crimes, namely bombing his own people with aviation.

Russian officials call these claims a bunch of lies. Russia Today correspondent Irina Galusho interviewed members of Russia's Joint Chiefs of Staff, who claimed "Some of the reports made by western media are not entirely corresponding to the pictures they are getting".

Where are the air strikes, for example, registered by the BBC and Al Jazeera, on February 22, on Benghazi? The Libyan government has ordered its aviation to strike against arms depots to stop them falling into the hands of the rebels (not unarmed civilians, but terrorists) since then, but the initial statement that the Government was using air strikes against "protesters" fails to produce any evidence. Basically because there isn't any.

And for those who made such claims, in the media and in governments? Where is the accountability? These politicians lie and remain in office? These journalists fabricate evidence and continue to work as if nothing had happened? 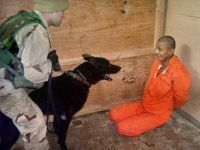 Perhaps Colonel Gaddafy should have ordered attacks by predator drones against the civilians, then he may have won a Nobel Peace Prize, like President Obama. Maybe he should have enticed them into a football match, like the British Black and Tans did with the Irish, and then mown them down with machine guns. Or how about a Lynndie England style "just having fun" medieval torture chamber, à la Abu Ghraib?

In short, the West is once again fabricating evidence, lying and manipulating the media, as it did in the Balkans, when an absurd image was shown of Bosnian "refugees" in a Serbian "concentration camp", when in fact the images were taken from within a barbed wire perimeter to protect Serbs against marauding terrorists... and as it has done so many times.

Time for the circus to move on, starting with Libya and ending with Iran. After all, Hillary Clinton represents what? The will of the people of the United States of America, or AIPAC (American Israel Public Affairs Committee)?

Amid the hype, from the bought western media, no reference to the great contribution Colonel Gadhafi has made, namely in helping to free countless peoples from the yolk of colonialism - without any personal gain, i.e. a real freedom fighter - no reference to the fact that Libya has the greatest Human Development Index in Africa. Some dictator, eh?

No mention of the fact that Gadhafi wrote the Green Book, expounding the Third Way of economic theory, and that he has implemented its teachings in Libya, namely the government of Libya by the Libyan people...the quality of life is over a hundred times better than it was when he took over in 1969, when he instilled a policy of control of Libyan resources by Libyans for Libyans, then literacy rates rose from 10 to 90 per cent.

Is this a dictator? Is he any more tyrannical than others who control countries in the Middle East? And that goes for the behaviour of the USA as well in Iraq...