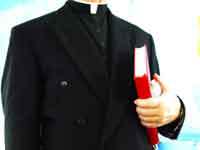 Unquestionably, deception is the chief weapon of evildoers. The Bible tells us that the serpent was craftier than any of the wild animals the LORD God had made. He said to the woman, "Did God really say, 'You must not eat from any tree in the garden'?"

Man's common afflictions such as death, mourning, crying and pain, began in the garden of Eden with one act of deception followed by one act of disobedience, which continues uninterrupted to this very day, and will continue tomorrow, and the day after tomorrow, and the following day, and so on, until Jesus Christ return to earth as promised, with thousands upon thousands of his holy ones to judge everyone, and to convict all the ungodly of all the ungodly acts they have done in the ungodly way, and of all the harsh words ungodly sinners have spoken against him.

Jesus said, "When the Son of Man comes in his glory, and all the angels with him, he will sit on his throne in heavenly glory. All the nations will be gathered before him, and he will separate the people one from another as a shepherd separates the sheep from the goats. He will put the sheep on his right and the goats on his left, and Jesus will judge the living and the dead beginning with the devil, or the deceiver who deceived them, he will be thrown into the lake of burning sulfur, where the beast and the false prophet also will be thrown, and they will be tormented day and night forever and ever.

Notice that if anyone's name isn't found written in the Lamb's book of life, they will be thrown into the lake of fire, where they will be tormented day and night forever and ever. You may ask, how do I get my name written in the Lamb's book of Life? The answer is very simple, just surrender your life to Jesus Christ and let Jesus be the Lord of your life. Jesus said, "Here I am! I stand at the door and knock. If anyone hears my voice and opens the door, I will come in and eat with him, and he with me." In other words you must have a personal relationship with Jesus.

Jesus said, "for the Son of Man came to seek and to save what was lost," meaning, Jesus came to restore what was lost in the garden of Eden, by offering himself as the sacrificial Lamb of God that takes away the sins of the world.

Christianity began in Jerusalem as a way of life after the resurrection of Jesus Christ from the death, as indicated by Jesus in a conversation with the Samaritan woman by Jacob's well, recorded in John 4: 1- 42, "Sir," the woman said, "I can see that you are a prophet. Our fathers worshiped on this mountain, but you Jews claim that the place where we must worship is in Jerusalem. Jesus declared, "Believe me, woman, a time is coming when you will worship the Father neither on this mountain nor in Jerusalem. Yet a time is coming and has now come when the true worshipers will worship the Father in spirit and truth, for they are the kind of worshipers the Father seeks. God is spirit, and his worshipers must worship in spirit and in truth."

Bellow are some samples of what some of these religious business enterprises or so-called mega-churches are saying about God's plan of salvation and the great commission of Jesus Christ given to the church through the words of His disciples, and sanctified by the Holy spirit.

Our Mission is to experience the heart of God in worship, to empower His people and to extend His love to the ends of the earth.

"We believe in the incredible potential of every human being, and are helping people to discover and develop that potential in all its fullness."

"To follow God's plan for believers and the church in the Bible."

"Our mission is to deliver the unchanging Word of God to an ever-changing world."

"Our leadership, our members, and our families are committed to changing lives, families, communities, and our world."

Well, that sounds truly impressive, but it's obvious that it has nothing to do with the Master's great commission found in Matthew 28:18-20, These churches appear to obey the first part of the commandment stating "Go and make disciples of all nations, baptizing them in the name of the Father and of the Son and of the Holy Spirit," but they totally ignore the second part of the command stating, "AND TEACHING THEM TO OBEY EVERITHING I HAVE COMMANDED YOU" Even if these pastors would want to obey, they really can't, because they have given up their constitutional rights when they signed up for the coveted IRS 501c3 Tax-Exempt Status, thus becoming the self-gagged puppets of the US Government.

Did the church ever need to request authorization from the Government to remain tax-exempt? Were churches prior to 1954 taxable? No, the IRS recognizes that churches are Tax-Exempt as stated in page 3 of the IRS Tax Guide for Churches Publication 1828 (Rev. 6-2008) Catalog Number 21096G.

Most churches apply voluntarily for 501c3 tax-Exempt status in order to stay out of political, and controversial issues legalized by the U.S. Government, thus reviving the doomed kingdoms of Sodom and Gomorrah for a mere pittance of thirty pieces of silver.

These deceivers are misguiding the church straight into hell, by failing to warn the wicked as commanded by Jesus Christ, that if they don't repent, and turn away from their sins they will not inherit the kingdom of God, neither the sexually immoral, idolaters, adulterers, male prostitutes, homosexual offenders, thieves, the greedy, drunkards, slanderers, swindlers, and all those who fail to speak up against all evil abominations, including the ones legalized by the US Government, such as Separation of Church and State, Affirmative Action, the Theory of Evolution, Abortion on Demand, Euthanasia, Divorce, Sodomy, and Same Sex Marriage.

These Self-gagged 501c3 pastors are prohibited by the U.S. Government to teach their congregations that the US Government must operate in submission to the Church of Jesus Christ, under the authority of the word of God found in Romans13: 1-2.

They are prohibited by the US Government to teach their congregations that the U.S. Government actually forces private businesses to hire unqualified personnel because of the color of their skin, which is none other than robbery without a gun.

They are prohibited by the U.S. Government to teach their congregations that the Theory of Evolution is only a fable.

They are prohibited by the U.S. Government to teach their congregations that the practices of Abortion, and Euthanasia are acts of murder.

And they are prohibited by the U.S. Government to teach their congregations that Divorce, Sodomy, and Same Sex Marriage are in effect nuclear missiles aimed with the sole purpose of annihilating the traditional family unit.

Although many self-gagged pastors give the impression of being the faithful followers of Jesus Christ, in reality they are marching to the drumbeat of the Internal Revenue Service, which is in the business of censoring morality since 1954. Churches are in complete denial of the fact that the US Government with a helping hand from the pastors of America are in actuality suppressing the Kingdom of God, but promoting the kingdom of Satan by bowing down to its oppressive marching orders found in the pages of the IRS Tax Guide for Churches, and Religious Organizations, Publication 1828 (Rev. 6-2008) Catalog Number 21096G, STATING:

People must understand that pastors holding IRS 501c3 Tax-Exempt Status issued by the U.S. Government are not called by Jesus Christ, on the contrary, they are prohibited by the IRS to preach the complete gospel of Christ. Therefore, it doesn't really matter how well they speak or how pious they appear, if you study these characters you will notice that they speak mostly truths mixed with subtle lies. They are like boxers insisting in facing their opponents in the ring with their arms tied behind their backs, they are like punching bags unable to stand firm on the teachings of Jesus Christ.

Consequently, Christians have steadily faded away from the Public Square, Public Education, the Entertainment and the News Media, the Political Arena, and the Halls of Government. And by choosing to remain silent these traitors have helped the wicked in taking over the culture by default. In effect, the gagged pulpits of America have become the springboards used by the wicked for the last sixty-five years to launch, and legalize one godless abomination after another, such as Separation of Church and State, Affirmative Action, Abortion on Demand, Euthanasia, Divorce, Sodomy and Same Sex Marriage.

Proceed to Part II of the article