Soccer Is The Opium Of The People

I shall not be watching one single game of soccer during this World Cup. Soccer has moved from the noble sport, to a means of mass communication, to a sinister control mechanism which hides a Pandora’s box of weird and wonderful financial deals and personal favours. While the people are fed a carefully controlled adrenalin fix drip by drip they are not thinking about serious things. Keep them stupid and control them. 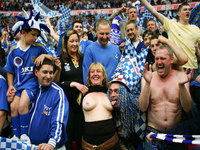 Soccer Is The Opium Of The People

I used to enjoy soccer. I used to enjoy playing it, I used to enjoy speaking about it. Nothing felt better than sending the ball screaming into the top corner of the goal from 30 yards out, nothing more cosy than the get-together after the match with the rest of the team.

However, as this mix of testosterone and adrenalin has moved off the playing field and onto the TV screen, the game has transformed from a sport into a sinister control mechanism, the true Opium of the People, keeping the masses stupefied with a carefully controlled fix which starts with the studied idiocy of the players themselves, the inanity of the team coaches, and ends with the TV companies that make billions out of pay-per-view, the agents who buy and sell players as if they were engaging in drugs trafficking and the Presidents of the clubs themselves, many of whom look and act like mafia men, faceless anonymities who suddenly got mega-rich quickly.

I shall therefore not be watching one minute of this Summer’s World Cup in South Africa and the only desire I have is that the FIFA 2010 is won by an African team. I shall be spending my time worrying about and studying more serious things, such as how an American rating agency can control the lives of Europeans, dictating whether or not they receive their pensions and how Europe has managed to get its foreign policy run by NATO.

I shall be studying public finances so as to find tangible arguments when Governments shrug off their responsibilities saying “Yes, but how do you pay for it?” an expression of the purest cynicism after trillions suddenly become available if we are speaking about bailing out banks.

And what will I be missing? Ridiculous clichés iterated by the players themselves (in between blowing their nose in their hands and wiping it on their hair, hawking and spitting) “You know, I will work hard to make my contribution to the team and hope to win because winning is important in football but at the end of the day some you lose and well, you know, that’s football!” Er, I beg your pardon? Did that disgusting creature actually say anything?

I shall be missing the nonsensical utterances of the team coaches, ex- or failed players who have reached Godlike status with expressions such as “I don’t like Italian football”, “You cannot make omelettes without eggs”, or “The Champions League final is the most important game in the world”. Or better, “I am a football person”.

I shall be missing the bungs won by the Presidents of the clubs as the agents eye up the players like some sort of a cattle market and make their ten or twenty per cent on the deal. I shall not miss watching twenty-two young men running after a ball, kicking each other, trying to destroy their careers, spitting, swearing and squaring up to the referee.

I shall not miss being financially raped by my Cable TV provider which immediately makes the PPV Sports channel available after one telephone call but which will take six months to turn it off (during which time I will be paying), a provider which sells me a package of channels to watch and then blocks the ones that show games for free during the World Cup. As everyone knows these days, it is easy to watch the World Cup for free on the Internet. Are they going to block that as well?

I shall not miss seeing the histrionics of the jewellery-clad belladonnas, writhing around on the sputum-infested pitch, losing a diamond ear-ring and revealing a left arm blue with tattoos and a right arm festooned with the words “Mum” “Dad” and “Shelley”.

“Shelley” is no doubt one of the WAGs, Wives and Girlfriends, who make a living out of draping themselves over someone’s arm, calling themselves “Shaggie’s girlfriend” (some pet name for one o’ the lads), who follow the team around opening their legs and closing their mouths, hopefully, except to scream at each other in the most spectacular catfights. These I shall miss.