Great news has arrived from America recently. All news agencies reported about NASA’s discovery in the field of space exploration: it turns out that there were bacteria found in a Martian meteorite. The discovery means that there are life forms outside Earth! 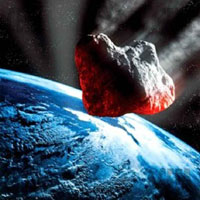 NASA’s discovery apparently unravels one of the biggest mysteries of the human civilization. This mystery appeared a long time ago indeed, after a human being became a Homo Sapiens. Man always wanted to know what was happening on Earth before him and how he appeared on this planet.

The answer could not be found for thousands of years. It appeared just a short while ago, when NASA scientists gathered for a news conference and said that they had found bacteria on the Martian meteorite discovered in the Antarctic.

The discovery of bacteria on the meteorite from Mars means that there was life on the red planet indeed, and it may exist there today too. That is why NASA launches Martian rovers and spacecraft to the planet and requires an additional funding for the Mars exploration program.

Those greedy Americans! If they want money, they are ready to advertise any kind of “breaking news” even if this news is not breaking at all.

As a matter of fact, the theory of life in space, and particularly on Mars, was confirmed a long time ago. The “discovery,” which NASA announced, was made decades ago by Russian scientists. It was the Russian scientists, who initiated the cooperation between Russian and American scientists regarding the problem.

Academician Aleksey Rozanov was the one who started the whole issue. Russian and American scientists have been cooperating for many years. Quite a number of research works have been made and many books and articles have been published. All of them were connected with one of the most important discoveries in contemporary science.

The President of the Russian Academy of Sciences Aleksey Rozanov made a report about it several years ago.

Together with American scientists we found fossilized bacteria and spores in meteorites. The meteorites that we studied were older than Earth, which means that life has a different origin than we originally believed.

It was in August of 1998. We were amazed when we found bacteria in phosphates – the organisms were beautifully preserved. Most likely, this form of life came from the planets that had lakes, swamps, pools and so on. It also became obvious that planets and pseudo-planets were going through the stage of destruction, and their fragments were traveling in space until some of them landed on Earth.

Hundreds of experiments have been conducted to prove the existence of bacteria and spores in meteorites. We released a number of very interesting publications in cooperation with NASA about it. Now we have a special department in the Academy – Space Biology. This field of science enjoys immense popularity in the world today.

The Americans try not to refer to the works of their colleagues in Russia. Many Russian scientists now work in their laboratories – they are guest-workers and therefore do not deserve any mentioning.