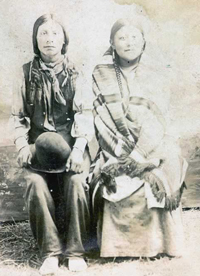 When in 1492, Columbus arrived to America and made his first contact with the indigenous people, he marked the beginning of the persecution and genocide of Native Americans. European colonization of Americas and rise of the new US Government brought nothing but problems to Native Americans.

The newly formed United States Government was eager to expand, to develop farming and settlements in new areas. During American expansion into the western frontier, one primary effort to destroy the Native American way of life was the attempts of the US government to make farmers of the Native Americans, to force them adopt the practice of private property, to built homes, to educate their children, and embrace Christianity. In addition, one of the most extensive methods to destroy their way of life was the deliberate destruction of flora and fauna which the Native American used for food, including slaughtering of buffalos.

In addition, President Andrew Jackson and United States Congress passed the Indian Removal Act of 1830, which authorized the President to conduct treaties to exchange Native American land east of the Mississippi River for lands west of the river. In one word; it was a policy of the US government to ethnically cleanse Native American tribes living east of the Mississippi River to lands west of the river. The Removal Act of 1830 set into motion a series of events which led to the "Trail of Tears" in 1838; a forced march of the Cherokees, resulting in the destruction of most of the Cherokee population. The age of “Manifest Destiny” had serious consequences for Native Americans. Policy was put into action to clear the land for white settlers. Methods for the removal included slaughter of villages by the military and also biological warfare. These methods caused increased death of Native American, diseases, starvation, and destruction of their way of life.

By conservative estimates, the population of the Native Americans prior to European contact was greater than 12 million. Today there are around 2.8 million Native Americans living on the territory of the United States, or around 0.8% of total population. In addition, in 2000, eight of ten Americans with Native American ancestry were of mixed blood.

However, maybe the biggest historical question is: who are Americans, really?

The majority of 306 million people currently living in the United States consist of White Americans, who trace their ancestry to the original peoples of Europe, North Africa, and the Middle East. Most White Americans are European American, descendants of immigrants who arrived since the establishment of the first colonies.

In 2000 census, Americans were able to state their ancestries; 7.2% of the US population was unaware about or could not trace ancestry, so they were counted as “Americans”. The most interesting part was the fact that German ancestry counted 15.2% or 42,885,162 million of the total population, second was African American with 12.9% or 36,419,434. Also, very interesting was the fact that in 1980 US Census 61.3 million Americans reported British ancestry (English, Scottish, Scotch-Irish, Welsh); just two decades later, that number is 36.4 million.

If we look back to political history, the ancestry of 42 US presidents is limited to the following seven heritages, or some combination thereof: Dutch, English, Irish, Scottish, Welsh, Swiss, or German. These include; John F. Kennedy (Irish), Franklin D. Roosevelt (French and Dutch), Abraham Lincoln (English), Martin Van Buren (Dutch), among others.

Therefore, our good friends and neighbors who like to condemn others should remember these facts next time they decide to criticize and lecture. They should address other countries and nations with respect, because Americans and the United States are the creation of older and astute countries and nations. The US Americans are in fact Europeans, Africans and Asians, and everything good or bad that they do to others; they in fact do to themselves, or better to say to their ancestors.