Historical lecture to the American people (Part I) 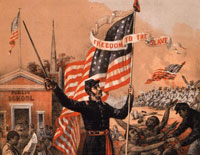 Historical lecture to the American people (Part I)

Every day we have the opportunity to read the articles, opinions and news analysis from one group of the American people, in which they more or less express their will in sometimes, very confusing way. Many of them do not know historical facts about their own country, not to mention history of other countries.

Sometimes, they behave like the world did not existed before formation of the US; like Americans felt out from the sky in 18th the century; and everything good that happened in the world, happened because of the United States. Many of these Americans publicly criticize other countries and nations, accusing them of injustice, genocide, the devaluation of human rights, racism, war crimes, among others. However, they seam to forget their own history, therefore, it pertinent to remind them about few very interesting things concerning US history.

The American Revolutionary War was a war between the Kingdom of Great Britain and thirteen united former British colonies – British America, and not war between Americans and British as many present in public. In 1776, during the American War of Independence, British Revolutionaries gained control of the thirteen united colonies and declared independence from the Kingdom of Great Britain, claiming sovereignty and rejecting any allegiance to the British Monarchy. This act resulted as a way for the United States to be officially recognized as the sovereign state by the Treaty of Paris in 1783. Therefore, we can say the American Revolutionary War was a civil war fought on colonized soil, as a war between British Crown and British rebels with help of other immigrants from Africa, Asia and Europe, not war between Americans and British, at least not, until international recognition of the US.

Pertaining to the US independence from the Great Britain, the US proclaimed independence first and as a new nation; the United States of America. Other countries did it much later. However, when it comes to independence, there are similarities between the US and Sudan, Ghana, Nigeria, Kenya, Zambia, Gambia, India, among others, they all gained independence from the Great Britain. Except, these countries were fully functioning countries before colonization, the US was not. Therefore the question that arises is: does Her Majesty British Queen still have the document which makes her the owner of the United States land?

There is a strong believe in the United States that the American Revolutionary War was a good war which brought freedom to the people and gave birth to the US. Yes, it was, but only for the new American nation. Many of these Americans forgot the other side of this war, like the fact that the war started as the war between Kingdom of Great Britain and British rebels in the North America and extended out to the Europe and the European colonies, ending as a global war between Britain, France, Spain and the Netherlands (Dutch Republic).

More than 20,000 African Americans such as Agrippa Hull and Prince Hall sided with the Patriot cause. Around 5,000 black men served in the Continental Army during the war, however, when George Washington took command of the Continental Army in July 1775, he issued an order to recruiters, ordering them not to enroll "any deserter from the Ministerial army, nor any stroller, negro or vagabond", despite the fact that they had fought side by side with their white counterparts at the battles of Lexington, Concord and Bunker Hill.

In November 1775, the Royal Governor of Virginia, Lord Dunmore issued a proclamation that he would free blacks who came to fight with the British. By December 1775 the British army had 300 slaves wearing a military uniform.

In response to Lord Dunmore proclamation, in 1776 George Washington issued orders to the recruiters to re-enlist liberated blacks who had already served in the army, and worried that these soldiers might cross over to the British side. The British also feared that blacks with weapons in their hands would start slave rebellions.

After the war, British loyalist left America with their African slaves. There were about 2,500 African Americans who belonged to the White loyalists and they generally remained slaves until slavery was abolished throughout the British Empire in 1834. Blacks who sided with the British were registered to the Book of Negros and were promised freedom. As the book came to close, they sailed to London and Nova Scotia as a free people as others left for Jamaica. Life for those who left for London and Nova Scotia was not easy; therefore, in 1792 around 1,193 blacks left for West Africa.

The African American Patriots who gave loyal service to the Continental Army receive no reward. In 1792, the United States Congress formally excluded the African Americans from military service, allowing only "free able-bodied white male citizens" to serve military. An estimated 100,000 African Americans escaped, died or were killed during the American Revolution.

One fifth of the total American population in 1776 was enslaved, about 500,000 black men, women and children. By 1860, there were 3.5 million enslaved African Americans in the United States due to the Atlantic slave trade; another 500,000 African Americans lived free across the country. After 200 years of depression, the African Americans saw freedom with the Civil Rights Movement, Civil Rights Act of 1964 and the Black Power movement.