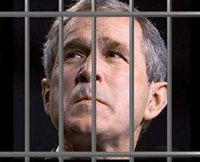 The reality is that George W. Bush and his minions have created the milieu that has brought the world to “the lowest common denominator.” It was Bush who said, “Damn the United Nations, damn what the inspectors say, damn international law, damn the opinion of the rest of the world, damn the argument that war should only be used as a last resort. And most of all, damn the truth!”

The question is why didn’t they see this milieu coming?

The answer evolves from the arrogant doctrine of “neo-conservatism” (hereinafter neo-fascism) subscribed to by the Bush dictatorship.

In my first article for Pravda.Ru, written shortly after the illegal invasion of Iraq, I argued that a primary motive for this criminal act of aggression was so the Bush dictatorship could move the neo-fascist theory of “unilateralism” into reality.

After the collapse of the Soviet Union, the neo-fascists, reveling in the belief that there was now only one “superpower,” decided they should make the rest of the world tremble on bended knee. There was, in their minds, no danger of the world sinking to the level of the Bush dictatorship (unless the dictatorship demanded that it do so), because the neo-fascists had the most powerful military in the world at their disposal to intimidate weaker countries, and they were eager to demonstrate their willingness to use it.

This neo-fascist philosophy is what recently compelled Vladimir Putin to express his suspicions that the Bush dictatorship instigated the events in Georgia. After all, the dream of every neo-fascist is to see America’s former rival powerless to stop military aggression at its very doorstep.

The plan backfired. And now the Bush dictatorship is trying to condemn the Russian government for doing the very same thing it did, and is still doing, in Iraq.

But did it truly backfire? Or did America’s neo-fascists get exactly what they wanted?

Most neo-fascists exhibit two characteristics: 1). They are bullying cowards who will eagerly sacrifice the lives of others in wars built upon lies, while using their wealth, political connections and family influences to avoid combat service themselves; 2). They profit from the military-industrial complex, and thus welcome a world that’s in a perpetual state of war.

Given this duplicity, it’s not surprising that some former members of the Bush dictatorship, Colin Powell and Scott McClellan in particular, are now trying to buy back their souls. Powell, the Bush dictatorship’s Secretary of State during the first four years of its illegal occupancy of the White House, was the man primarily responsible for lying to the United Nations, and the world, about Iraq’s “weapons of mass destruction.” Now he is involved in charitable causes allegedly designed to “improve children’s environments.”

McClellan, as an act of “contrition” and a way to regain the values of his “Christian” faith, recently wrote a book exposing the profligacy and mendacity of the Bush dictatorship.

Unfortunately for them, the time to buy back their souls has long past. They profited from the Faustian deal made by the Bush dictatorship, and now they want to repeat the same pattern of hypocrisy that “repentant” evildoers have done throughout history: seeking absolution only after it’s too late to undo the harm their evil created.

The Bible says, “Whatsoever a man soweth, that shall he also reap.” But this hasn’t seemed to work in the case of Bush and his minions. They sowed the evil, but it’s the world that reaped the results. And even though they are some of the worst criminals in human history, Bush and his minions haven’t even faced the prospect of impeachment, let alone prosecution, for their crimes, and will undoubtedly live out the remainder of their days in wealth and comfort.

But if the universe is just, then all the members of the Bush dictatorship, past and present, and everyone who supported them as they spawned and spread their evil, deservedly have reservations in hell—eternity’s “lowest common denominator.”