Former President of Georgia, currently the head of the Odessa region of Ukraine, Mikhail Saakashvili, has committed follies again. 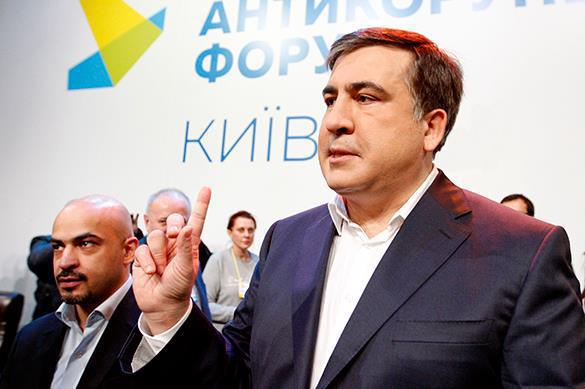 This time, tie-eater Saakashvili exposed Ukraine's military secrets. He uploaded the locations of Ukrainian troops, secret maps of Ukrainian army checkpoints, faces of soldiers and commanders, and other interesting materials of the Ukrainian Armed Forces on the Internet.

After such publications, the commander of the "Storm" battalion was ordered to resign.

"It's not fair, because the governor has done nothing for the battalion. Filming all the  roadblocks that we protect, faces of our soldiers and uploading all that on the Internet - this is "professionalism" at its finest. Our guys started receiving threats on the Internet," one of the servicemen said, RIA Novosti reports.

Mikhail Saakashvili is famous throughout the world for his inappropriate behavior. Not that long ago, Saakashvili had an eloquent fight with Ukrainian Internal Affairs Minister Arsen Avakov, having called him "a corrupt minister." The fight occurred at a meeting of the Ukrainian government under the chairmanship of President Poroshenko (click here for the video of the rant).

Also, during a training session of the Ukrainian police, Saakashvili played the role of a wounded person, but he could hardly fit into the boot of the police car because of his excessive weight.