Europe turns into center of political repression. Why?

Europe has quietly become a hotbed of political repression amid the talks about "liberal democracy" and "freedom." As it turns out, anti-war protests in Europe are not allowed, while other groups - fascists that praise Nazi collaborators of the World War II period, feminist and gay rights groups - can express themselves freely. 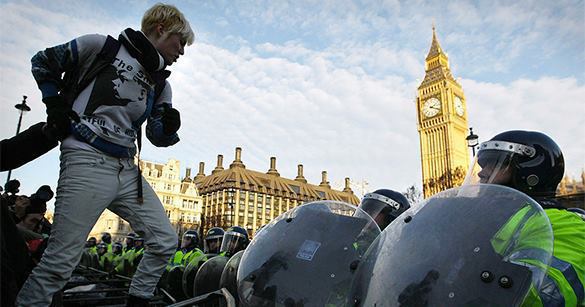 If Europeans take to the streets to set out their protests against war, against NATO, European mass media portrays such activities as "pro-Russian" acts staged by Moscow puppets.

Police and state repression, often of a violent nature, has been carried out under the auspices of "fighting terrorists" in Ukraine all throughout the conflict that erupted in early 2014. So too has such repression reared its ugly head in Lithuania in recent months, as anti-imperialist leftist organizers have been singled out for political persecution by the vehemently Russophobic, Euro-sycophant government. Additionally, Estonia has continued its systematic oppression of its Russian-speaking population which has been forced to exist as second class citizens, with dubious legal protections to say the least.

Meanwhile anti-NATO sentiment has been gaining pace throughout Eastern Europe. In Poland and in the Czech Republic, many citizens form anti-imperialist movements advocating peace in Europe and rejecting the insanity of aggression against at Russia.

The infamous May 2 Odessa massacre of fascist thugs of Right Sector and their soccer hooligan co-conspirators coupled with the impunity provided them by the police and the Ukrainian government, served as a message to the world. The message said that the so called "New Ukraine" was neither democratic nor respectful of the rule of law. Needless to say that the western media turned a blind eye on the massacre. Western news agencies referred to the bloody chaos at the House of Trade Unions in Odessa as "clashes." However, the massacre in Odessa was no clash, it was a one-sided slaughter of defenseless human beings.