Protests against austerity in Europe

Thousands of people participated in the demonstrations "People United Against the Troika", the first initiative of convergence in the streets in these months of protest against European austerity. There were acts in Germany, where there was a confrontation with police, also in France, Portugal and Spain. 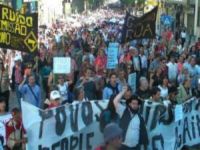 Lisbon, Madrid, Barcelona and Frankfurt were the cities where the protest was heard more forcefully. Thousands of people took to the streets to demand the end of the austerity policy in Europe and financial blackmail on citizens, and demanded more democracy against the dictatorship of the markets.

In the city that hosts the headquarters of the European Central Bank, Frankfurt, police repressed the demonstration, dividing and enclosing a portion of the protesters, which led to clashes and arrests. This was an exception to the rule of over a hundred cities where the protest passed off peacefully.

In Portugal, thousands of people joined demonstrations in Lisbon and Oporto, and a few hundred in the remaining eighteen cities, with a strong presence of pensioners. The requirement of the government's resignation was unanimous in all locations where the protest took place, both in slogans chanted by the protesters, and in the interventions of open assembly concentrations, also audible was the appeal to participate in the general strike of June 27th.

In Lisbon, a group of 20 Turks, mostly Erasmus students, joined the rally to express solidarity with the victims of police repression in Istanbul. Arménio Carlos, leader of CGTP Trade Union Syndicate, joined this international initiative to protest against the troika and call for the government's resignation. One unexpected presence was that of Mário Soares, who came along to the IMF headquarters to greet the protesters.

Madrid and Barcelona also joined thousands of people in demonstrations "People United Against the Troika", a protest that took place in other Spanish cities. The criticism of this "Citizen's Tide" against austerity cuts and bailout of banks joined together unions, associations and organizations fighting against evictions or the pressure on citizens exerted by the banks which have been rescued with public funds.

In Madrid, the protesters sang Grândola Vila Morena next to the European Commission, a song also sung in protest in Paris, convened by delegations of the Left Bloc, SYRIZA and Juventud Sin Futuro in France and supported by dozens of collectives and associations.