The commander of Russian Air Force, Viktor Bondyrev, stated that Russia's state-of-the-art fighter jet MiG-35 would be able to use advanced weapons, including laser weapons. 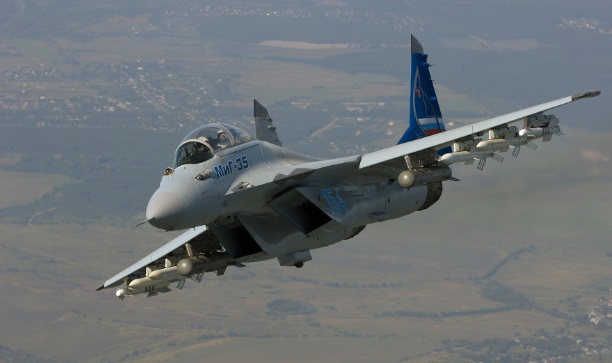 "The fighter is designed specifically for combat activities in conflicts of high intensity and under conditions of strong air defence. The strong performance of the fighter jet has been achieved with the help of onboard equipment, new optical radar station and reduced radar visibility. We have increased the number of suspension points from six to eight, which allows to use current and future models of aircraft weapons, including laser weapons," President of the United Aircraft Corporation Yuri Slusar told TASS.

"The Innovative multifunctional MiG-35 fighter has better performance characteristics. It is equipped with most modern weapons," Putin said. "The aircraft can follow from 10 to 30 targets at a time. It can operate not only on the ground but also on the sea," he added.

"This is a very interesting, unique machine indeed," Putin said, pointing out the export potential of the fighter jet.

Representatives of Russian Aerospace Forces said on January 27 that the entire fleet of lightweight fighters would be replaced with the latest MiG-35 combat aircraft. The chief of Russia's Air Force, Viktor Bondarev, said during the presentation of the MiG-35 that the fighter jet will replace all light fighter aircraft.