Authorities of the Military-Industrial Company aim to sign a deal on Tigr armoured vehicles supply to Egypt in the nearest future. 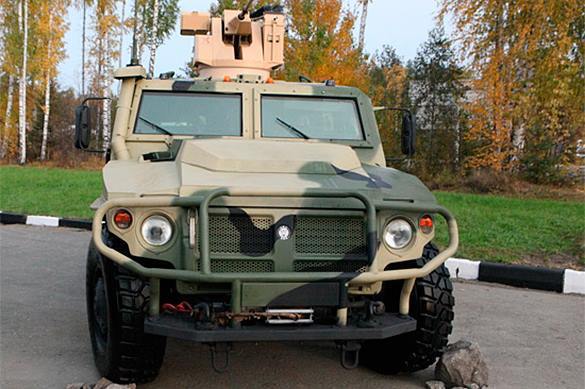 As Aleksandr Krasovitsky, General Director of the company, reported, "if talking about signing and promotion of the deals, we have completed 85% for today. The vehicle is much in demand, its performance characteristics are known. We hope that the deal will be signed in the nearest future," he stated during KADEX-2016 exhibition in Kazakhstan.

As Pravda.Ru reported, Tigr is a multipurpose, all-terrain infantry mobility vehicle. A rocket complex which is installed on it, is developed on the basis of a tank guided weapon Refleks.

While the main combat tank T-14 is the most popular representative of the Armata family, a series of transport vehicles designed in Russia comprise a large quantity of combat vehicles, including Terminator-3, of which NATO should be really watchful.

Representatives of the new vehicle developers do not disclose details, but for the fact that it will be based on the Armata chassis.

The US army does not possess direct analogues of such vehicles. A combat vehicle M3 may be called as the closest equivalent, but it may be a bad comparison at best.