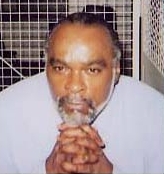 After the U.S. Supreme Court rejected a request for a stay of execution last night, 51-year-old Williams was to be killed in one of the local prisons by lethal injection shortly after midnight. He was accused of murder 26 years ago.

When Mr. Williams was young he was the head of a gang group, but not so long ago he became well-known in scientific circles. Last week he was nominated for the Nobel Peace Price for writing books for children in which he was denouncing street violence.

More than 2,000 death penalty opponents stood or sat in the middle of the two-lane road leading to the prison gates, waving signs, shivering in the cold and trying to ignore a pair of Los Angeles shock jocks who were broadcasting live and screaming "Kill Tookie" into their microphones.

A minute after midnight today, as the crowd realized that the execution would go forward, scores of people in the crowd began to weep uncontrollably.

Mr. Schwarzenegger said his continued protestations of innocence negated any claim that he had redeemed himself. "Stanley Williams insists he is innocent, and that he will not and should not apologize or otherwise atone for the murders of the four victims in this case," Mr Schwarzenegger wrote. "Without an apology and atonement for these senseless and brutal killings there can be no redemption. Based on the cumulative weight of the evidence, there is no reason to second guess the jury's decision of guilt or raise significant doubts or serious reservations about Williams' convictions and death sentence."

Seventeen reporters witnessed the execution and gave their accounts afterward. Inserting the IVs to administer the lethal chemicals took nearly 20 minutes, with staff having particular difficulty getting a needle into Williams' left arm.