The mayor of Tehran said all those on board had been killed in Tuesday's crash. Tehran state radio said 119 people were killed: all passengers, crewmembers and dozens of those living in the building. 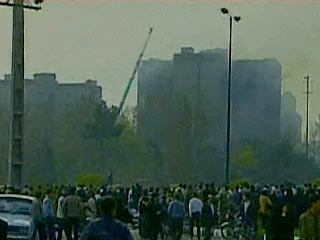 The plane crashed while trying to make an emergency landing at Tehran's main international Mehrabad airport.

The building was reported to be on fire, and fire fighters were on the scene working to save people trapped in the building in the Azari residential district, the AP says.

Iranian state television said the plane burst into flames upon impact. The official news agency, IRNA, says 10 bodies have been taken from the crash site. There are also reports of charred bodies on the ground nearby.

IRNA said the plane was bound for the southern port of Bandar Abbas and most of the passengers were local journalists who were going to cover military exercises in the region. The pilot had reported engine trouble and requested an emergency landing at Tehran's Mehrabad international airport, the police told state television.

The police cordoned off the area, trying to keep back scores of anxious residents trying to push past them. Emergency services were using helicopters, ambulances and buses to evacuate the dead and wounded. Bulldozers also arrived at the scene. Smoke was still pouring out of the building. Military officials could not be reached for information.