The government of Iran with President Mahmoud Ahmadinejad at the head held a session on Sunday. The session ended with a decision to start the construction of another nuclear power plant in the country, in the south-west of Iran, the province of Khuzestan. The Secretary of the Supreme Council for National Defense, Ali Larijani, told reporters that Iran was going to announce the tender for the construction of the nuclear power plant before March of 2006. 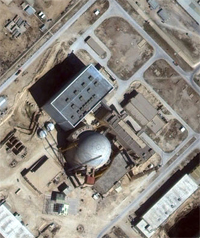 The new Iranian president apparently tries to prove to the international community that he is not going to shut down the nuclear industry of his nation. The Director of the International Atomic Energy Agency Mohamed El Baradei urged Iran and Western countries not to aggravate the situation with the nuclear program of Iran. El-Baradei said he could see no victors from an escalation. "Everybody would be hurt," he said, referring to all parties in the dispute. "You would then open a Pandora's box. There would be efforts to isolate Iran; Iran would retaliate; and at the end of the day you have to go back to the negotiating table to find the solution," he added.

For the time being, Iran is still working on the completion of its first nuclear power plant in Bushehr. Russian companies act as contractors in the project. The test launch of the first module of the station is said to take place in the summer of 2006 (the station is to be put in operation at the end of the next year). Russian companies are ready to build the second power-generating unit of the nuclear station in Bushehr. Furthermore, they are willing to participate in the construction of other nuclear power plants in Iran.

Iran's uranium-enrichment program still remains an issue for the IAEA. Mr. El Baradei said that he was aware of Iran's intention to develop the complete nuclear cycle. Once they have the cycle, El Baradei believes, it will take Iran just several months to create an A-bomb. Nevertheless, the director of the IAEA does not say that Iran works on nuclear weapons.

The IAEA plans to conduct “the talks about the talks” between Tehran, Great Britain, Germany and France before the end of the current year. The talks were suspended in August, when Iran turned down its obligations to freeze uranium-enrichment works. According to Ali Larijani, Tehran will conduct negotiations with European officials pertaining to the question of enriched uranium as nuclear fuel for nuclear power plants. “We will not discuss the construction of new atomic stations,” said he.

El Baradei pins hopes on Russia's compromising suggestions to Iran as well. Russian officials suggested uranium could be enriched for Iran outside the country. Iran could conduct the preparatory stage on its territory, when the uranium ore is turned into gas. The gas could be subsequently delivered to Russia in special containers, and Russian specialists could complete the enrichment process. “We believe that it is a viable idea. It is capable of balancing the Iranian nuclear issue out,” Russia's Minister for Foreign Affairs, Sergei Lavrov said.

The Iranian administration treated Russia's suggestion negatively fearing that Russia may refuse to handle nuclear fuel deliveries. However, El Baradei said, Iran did not decline Russia's suggestion on the matter. An official spokesman for the Iranian Foreign Affairs Ministry, Hamid Reza Asefi, said that Iran had never received any plans from Russia.