The Jordanian investigators into the attacks in Amman said Monday that the Iraqi woman captured by the police had volunteered to become a suicide bomber because three of her brothers had been killed during "operations" in Iraq.

Residents of Fallujah, an insurgent Iraqi city, said they knew her family. Her brothers, they said, had been killed in conflicts with American-led forces. 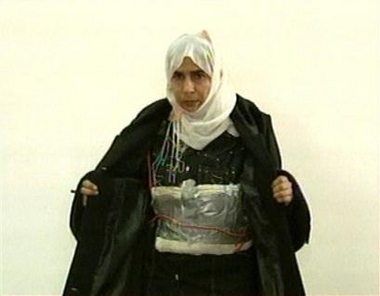 The woman, Sajida Mubarak al-Rishawi, intended to detonate her own explosive-packed belt when she walked into the Radisson SAS Hotel last Wednesday night, investigators said, but was unable to succeed because she had left a crucial component - what one investigator called a "key" - in the car, the New York Times reports.

Ms. Rishawi, 35, was married to Ali Hussein al-Shumari. The security official said the couple did not have any children. In her confession, she said that she lived in Ramadi, Iraq, and that her husband "planned everything." The investigator, however, said she was a willing participant.

She said that on Nov. 5, she and her husband were picked up in Iraq in a white car with a driver and a passenger and that they entered Jordan using fake Iraqi passports. She said that they rented an apartment and that her husband had put an explosive belt on himself, then on her, and taught her how to use it.

She said she saw a wedding in progress when she tried to detonate her bomb.
"My husband executed the attack," she said in the videotape. "I tried to detonate and it failed. People started running and I ran with them."

While a videotaped confession showing Ms. Rishawi wearing the disarmed suicide belt was being broadcast around the world, details about her life, motivation and role in the attacks that killed 57 people began to emerge. One investigator said Ms. Rishawi had not shown any remorse.

The American military also said Monday that it had briefly detained a man in Iraq last year with the same name as one of the Jordan bombers. But the man, Safah Muhammad Ali, was released because he was judged not to be a threat.

In all the years Jordanian authorities have been chasing terrorists, they said, they had never before had a case involving a woman. But investigators learned of her involvement shortly after the hotel attacks, when the owner of a house in Amman phoned the authorities to say that he had rented an apartment to three men and a woman several days before the blasts - but that they had not returned Wednesday.