Jordanian television broadcast the confession of the Iraqi woman, a suspected a suicide bomber, who had failed to  blow herself up in Amman, September 9. The families and friends of those killed with the hotel bombings have seen the face of the woman who was a part of the terrorist team. The capture of the woman was reported on Sunday morning. In her confession Sajida Mubarak Atrous al-Rishawi said how she and other terrorists came to Jordan, how they were preparing their attack and, finally, what prevented her from completing the bloody mission. 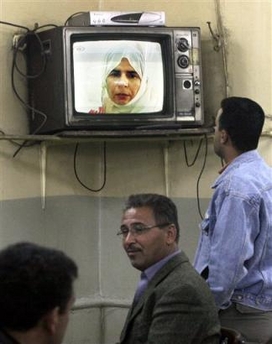 Jordan's Deputy Prime Minister, Marwan Muasher, said the woman, apparently dressed appropriately for the wedding, had struggled with the cord on her explosives belt. He said that when her husband saw her fumbling he pushed her out of the ballroom. Once she was out, he blew himself up.

Looking nervous and wringing her hands, Sajida Mubarak Atrous al-Rishawi, 35, described how she failed to explode her bomb during a wedding reception at the Radisson SAS hotel on Wednesday night after struggling with the cord on her explosives belt. "My husband wore an (explosives-packed) belt and put one on me. He taught me how to use it," al-Rishawi said, wearing a white head scarf, a black gown and a disabled bomb belt around her waist, the London Free Press reports.

People in Jordan think that it is a miracle that the police have captured a suicide bomber. Prime Minister Marwan Muasher thanked the police for the excellent job on Sunday. However, a lot of work has to be done. Now Sajida Mubarak Atrous al-Rishawi is under arrest and is waiting to be put on trial. For the time being the arrested suicide bomber is staying in prison.