Suicide bombers blew themselves up at three VIP hotels in Amman, the capital of Jordan, killing at least 57 and wounding over 100 people. The three attacks, which occurred yesterday almost simultaneously, took place at the Days Inn, Grand Hyatt and the Radisson SAS hotel, which was popular with many international tourists, including Israelis.

Two bombs exploded while crowds were celebrating weddings, leaving blood and destruction at Amman's luxury Grand Hyatt hotel and the nearby Radisson SAS. A third blast targeted a Days Inn hotel. One of the wedding guests at the Radisson, who gave his name only as Ahmed said: "We thought it was fireworks for the wedding but I saw people falling to the ground. I saw blood. There were people killed. It was ugly."

The Jordanian Deputy Prime Minister, Marwan Muasher, said that 57 had been killed in the blasts. While there was no immediate claim of responsibility, Abu Musab al-Zarqawi, held responsible for a series of suicide bombings and kidnappings in Iraq, was identified as a key suspect of the attacks.

While there were no immediate reports of Israeli casualties, Israel arranged a rare night-time opening of the Allenby Bridge across the Jordan River to allow tourists to return to Israel.

Jordan's King Abdullah II said his country's efforts to combat terrorism wouldn't be deterred by the attacks, which he described as the work of "a lost and misled group.'' The attacks destroyed the fragile calm that Jordan has enjoyed despite its proximity to Iraq and the support of its ruler, King Abdullah, for American and 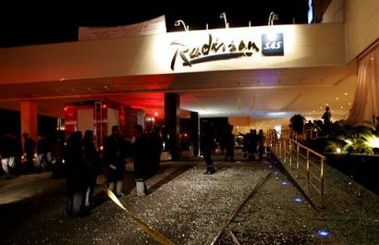 Tony Blair said he was shocked and saddened by the bombings in Jordan. "Our thoughts and prayers are with the victims and their families. We were deeply grateful for the support of the Jordanian government and people after the attacks in London in July and we stand together in this battle against the scourge of terrorism," he said.

In the last two years big western hotels have sprung up and their bars and restaurants are filled with aid workers and bodyguards taking a break from their work in Iraq. The nightclub of the Grand Hyatt was a popular meeting place for east European prostitutes and foreign workers.