Thirty-two prison inmates were killed overnight during a riot and subsequent fire at a prison in the city of Magdalena, some 120 kilometres from the capital of Buenos Aires, Argentine officials said on Sunday. The tragedy ocurred during the Mother's Day celebrations in the South American country when inmates inhaled carbon monoxide gas after setting clothing and cushions on fire during a prison riot. 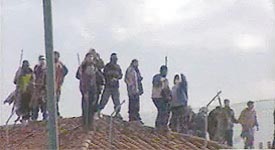 According to specialists, Mother's Days as well as Christmas and new year celebrations, are very sensistive days for the life in Argentine prisons as inmates usually claim for an extended period for visits from their relatives. From time to time the protests lead to deadly riots as Sunday's one in the city of Magdalena.

All the deaths appeared to have been caused by asphyxiation after inmates were overcome by smoke, said Justice Minister Eduardo Di Rocco of Buenos Aires province, where the prison is located. Di Rocco said inmates first began fighting just before midnight and then set mattresses and blankets alight. The fire spread through one of several cellblocks in the sprawling prison.

Di Rocco had no information on survivors other than to say 16 others in the unit would be interrogated to determine the exact chain of events. Other 6 inmates had to be hospitalized.

On Sunday afternoon, some 500 relatives anxiously massed outside the prison, demanding to know about their loved ones. Some of the relatives briefly scuffled with police, who held them back with shields before jailers later calmed the crowd and allowed visitors to begin entering other areas of the prison, which houses more than 800 inmates.

This is the worst-ever tragedy of the kind in Argentine history. However, deadly incidents ocurr from time to time in the collapsed local prison system overcrowded by inmates who patiently wait for definitive rules from the courts. On February 10, rioting at the San Martin penitentiary in the central Argentine province of Cordoba caused eight deaths. During that rampage, a warden and two dozen guards were taken hostage.

The Argentine government has repeatedly promised to build new jails to ease the situation, but failed to provide with a clear plan to achieve it. The Ministry of Federal Planning had to overturn a tender to build three new jails recently after a lawmaker from thecenter-left party ARI dennounced a corruption scandal connected to the operation.