Argentine political campaign heats up ahead of key mid-term elections

As Argentineans prepare to vote on half of Congress in October's mid-term elections, political campaigns surrounding this key vote are heating up amid accusations of plots to undermine the government and appeals to prevent an escalation of violence in the South American country. President Nestor Kirchner said last week that his fellow Peronist presidential predecessors, Carlos Menem and Eduardo Duhalde –the current head of the Mercosur commission – were plotting to “destabilize” his administration, sparking reactions among opposition leaders who warned on an “escalation of violence.” 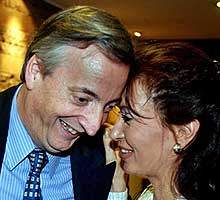 According to Pravda.Ru sources in Buenos Aires, the split of the ruling Peronist party into two factions – one led by Kirchner and the other by Duhalde – is definitive. Both factions will be listed separately in October polls in most of the country's districts, but particularly in the key province of Buenos Aires, where Kirchner's wife, Cristina Fernandez, faces Duhalde's wife, Hilda Gonzalez, for a seat in the National Senate.

The Duhaldes have controlled the province for 12 years and are not eager to see their political power disappear if Kirchner wins. Both sides were close to a deal in June but failed to reach an agreement on the selection of candidates. Since then the former allies have repeatedly clashed with increasing animosity, spreading rumours about Duhalde's resignation as head of the Mercosur diplomatic mission.

At first, the opposition doubted the authenticity of the Peronist split. Socialist, Communist and conservative leaders believed it to be a political tactic with which the Peronist Party could obtain more votes by running more than one candidate in each electoral district. The veracity of the split became clear given sustained public hostility between factions.

In an attempt to demonstrate to the electorate that there is no turning back, Kirchner publicly accused his predecessor of conspiracy, as members of his cabinet told reporters that Mr. Duhalde could be behind the violent protests that occurred in Buenos Aires during the past month.

Strikes, roadblocks and protests have become part of Argentineans' everyday life since country's financial collapse in December 2001, but have recently taken a more radical turn. Protesters argue that their economic situation has not improved despite the economy's healthy post-crisis and demand a more equitable distribution of earnings. The government believes the protestors to be motivated more by politics than economics.

According to President Kirchner and his top officials, including the powerful first lady, strikers and protesters are being induced to act by “leftist parties” – mainly Trotskyites – and the opposition within the Peronist Party led by Duhalde. In the meantime, the non-Peronist opposition warns of an escalation of violence ahead of October elections.

“We want order, but an order of peace, not the reign of violence that kills us,” said Elisa Carrio – eloquent leader of the center - left ARI party and October candidate for seat in the lower house — in a rally. Carrio, a candidate preferred by the sophisticated electorate of the city of Buenos Aires, believes Kirchner and Duhalde are fighting for control of the Peronists' dirty deals and demands a complete makeover of country's political practices.

Similar statements were made by conservative and leftist leaders all across the fragmented Argentine political spectrum.

All in all, the government expects a stunning victory in October polls across the country despite its opponents' strength in the country's main districts. According to opinion polls, the Socialists would win in Santa Fe, Mrs. Carrio would defeat the government's candidate and current  Foreign Minister Rafael Bielsa in the capital, and a tough fight is expected in the key province of Buenos Aires. There, the first lady runs well ahead of Mr. Duhalde's wife, but recent polls indicate victory will be not as easy as the government first believed.

President Kirchner badly needs a decisive victory to legitimate the popularity he enjoys in opinion polls. Kirchner became president with only 22 percent of the vote in the 2003 elections,  a fact he wishes to leave behind.