Hurricane Rita slammed into Texas and Louisiana early Saturday, smashing windows, sparking fires and knocking power out to more than one million customers, but largely sparing vulnerable Houston and already reeling New Orleans. Rita made landfall at 0730 GMT as a Category 3 storm just east of the Sabine Pass, on the Texas-Louisiana line, bringing top winds of 193 kmph and warnings of up to 64 cm of rain, the National Hurricane Centre said.

By late morning, it had weakened to barely above hurricane status, with its sustained winds at 75 mph (121 kmph) as it moved north near Jasper.

But the flood-prone cities of Houston and Galveston - largely evacuated over the past four days - escaped a direct hit. Rita and Katrina knocked out nearly all energy production in the offshore oil fields of the Gulf of Mexico and 30 percent of the U.S. refining capacity onshore.  At least three oil refineries were damaged by Rita, oil companies said.

Authorities in central Mississippi reported the first known casualty, as one unidentified person was killed by a tornado spun off Rita, downgraded on Saturday to a tropical storm. No deaths were reported in Louisiana and Texas, though 24 elderly evacuees were killed in an explosion in a bus on Friday as they joined a mass exodus out of the danger zone.

The town of Port Arthur, Texas, close to where Rita's swirling eye came ashore, was left with waist high floods, downed power lines and uprooted trees. Cars lay smashed on the streets and the main refinery was out of reach after the storm struck.

Risk modeling experts said up to $6 billion in damages had been inflicted by Rita, which came less than a month after Hurricane Katrina struck Mississippi and 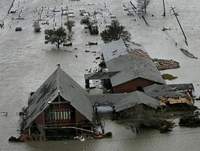 Louisiana, leaving the historic city of New Orleans in ruins. Unlike New Orleans and Katrina, rescue workers arrived quickly after the storm and there was no repeat of the shocking scenes of crime and chaos that besieged the Big Easy. Despite the new round of flooding, Mayor Ray Nagin said he would resume his plan to repopulate the least affected city neighbourhoods, perhaps as soon as Monday.
"Katrina was the wash cycle, Rita was the rinse cycle. I hope we get time to hang on the line and dry and not go into the spin cycle," Nagin said.