Residents of New Orleans, who have just started returning to their hurricane-ravaged city, will most likely have to leave their suitcases unpacked and flee again. US federal officials warned that Tropical Storm Rita could breach the city's temporarily patched-up levees and swamp the city all over again. The storm, which is expected to hit the US Gulf Coast at the end of the current week, may easily complete the destruction of Hurricane Katrina, which has killed almost one thousand people. Rita is presently whirling over the Bahamas: the storm needs to gain only four miles per hour to its speed in order it could be referred to as a hurricane. The storm is gathering power and moving to the north-west, and is likely to become  category three hurricane with winds of up to 209 km/h. 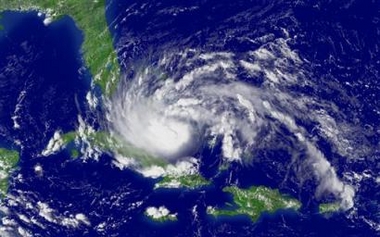 While the Bahamas, Cuba and Key West were the most immediately threatened, with Texas at risk over the weekend, hurricane experts warned the storm might deviate from its forecast track and eventually slam ashore close to New Orleans, which is struggling to recover from Katrina's devastation.

New Orleans Mayor Ray Nagin has suspended a plan to allow some residents to return to their hurricane-ravaged city this week because of another storm gathering off the coast of Florida. "We are suspending all re-entry into the city of New Orleans as of this moment," Nagin said.

Rita may turn into a hurricane within the next few hours. The storm is forecast to cross over the Florida Keys today and into the Gulf of Mexico tomorrow, Bloomberg says. According to New Orleans mayor, the city's levees will not be able to handle more than 23 centimeters (9 inches) of rain. “This is a different type of event,'' Nagin said of Tropical Storm Rita. “Our levee systems are still in a very weak condition. Our pumping stations are not at full capacity, and any type of storm that heads this way and hits us will put the east bank of Orleans Parish in very significant harm's way. So I'm encouraging everyone to leave.''

It is noteworthy that Nagin's repopulation plan had barely begun, and the return of residents to Algiers on Monday was more a trickle than a stampede. The mayor was planning to return one-third of the population, i.e. 180 thousand people. Practically all federal officials including the ones from the US administration expressed their concerns about such an intention and cautioned that the mayor was moving too fast. There is still no drinking water in most of New Orleans districts, rescuing services do not work either, the city lacks a lot of other vitally important facilities. Those few enthusiasts, who return to the devastated city to recreate their homes, receive two-page announcements from the city government. The announcement has an uplifting beginning as it says “Welcome home!” But then it continues:  “You are entering at your own risk. The city of New Orleans remains a hazardous site, and ongoing health and safety issues are being assessed."